It goes without saying that Britain is a nation of beer lovers, with 8.5 billion pints of beer sold in the UK in 2018.

As someone who enjoys the occasional beer, I was over the moon to hear about South Bermondsey based craft brewers Small Beer. As well as producing great tasting vegan low alcohol ‘small’ beers, they have ingeniously designed a brewing system that requires just 1 ½ pints of water to brew one pint of Small Beer.

How has Small Beer managed to save so much water? In most commercial breweries, waste products are drained on to the floor, which is then hosed down the drain.⁠ Instead, Small Beer operates differently – with the country’s only ‘Dry Floor’ policy that saves hundreds of litres of water every day.

So much so, that since their first commercial brew in 2017, Small Beer says they’ve saved 1.4 million litres of water.

Why Stop At Saving Water?

Small Beer hasn’t just stopped at saving water. All aspects of sustainability have been considered. From the obvious, such as the beer labels, boxes, and business cards being made from 100% recycled materials; to the other sustainability aspects that are often overlooked, like the efficiency of their packaging.

You see, all Small Beers are packaged in stubby bottles because their design allows 672 litres of beer to fit on one pallet vs. the usual 480 litres. This helps them to reduce their carbon footprint by maximising the volume of stock per delivery. This is the kind of thinking that really impresses me.

Zero-waste principles are also employed. Spent grain is delivered to a partner farm, for use as feed for cows. Even their grain sacks, which their malt supplier can’t refill, are donated to BOST, a social and environmental charity, based locally, who use them for storing and moving gardening materials across their neighbourhood programmes.⁠

Small Beer has been recognised by their ethical production and responsible brewing practices, by, in 2019, becoming London’s first B-CORP™ certified brewery. This is a certification that recognises businesses that meet the highest standards of verified social and environmental performance, public transparency, and legal accountability, and help build a more inclusive and sustainable economy.

Of course, as Small Beer themselves say: “We’re not a ‘sustainable beer’. We’re a great tasting beer that brews with our world in mind“.

Impressed by Small Beer’s eco-credentials, and intrigued by low-alcohol beer, my partner and I sampled a few of Small Beer’s selection to test them on their taste claims. I know, I know, it’s a tough job, but somebody has to do it!

I always imagined low-alcohol beer to taste quite watery, but this was definitely not the case with Small Beer – each beer is ram-packed full of flavour. We were blown away by the Dark Lager, which was hands down our favourite, with its hints of chocolate and coffee.  The refreshing citrus flavours of the Session Pale came a close second, however, we certainly wouldn’t turn down the Steam or Lager if offered!

As well as the flavour, what we really appreciated, being people that, let’s just say, are not in their twenties, or, ahem, thirties anymore, is that you can (responsibly) enjoy a few great tasting craft beers of an evening, and not have a sore head in the morning. All the joy, and none of the consequences!

Looking for a vegan Quorn recipe idea? Well, I’ve got you covered! Let me show you how to make this vegan creamy Mediterranean dish, made with Quorn Vegan Pieces and flavourful vegetables.

What if I also tell you that once you’ve prepped your vegetables, that this recipe comes together in one pot in about 15 minutes? Oh yes! I am well and truly all about no-fuss cooking.

For this particular recipe, Quorn challenged me to use up what I had in the fridge. I had some vegetables needing using up – some halved peppers, half an onion, and half a courgette, as well as a few tomatoes. Pasta and pesto is my go-to comfort food, so there is always a jar of opened pesto in there, and I had some vegan cream leftover from the previous evening’s pudding (strawberries and cream!).

To make this a practical zero-waste recipe,  I’ve suggested a few variations depending on what’s in your cupboards, which all work just as well below. 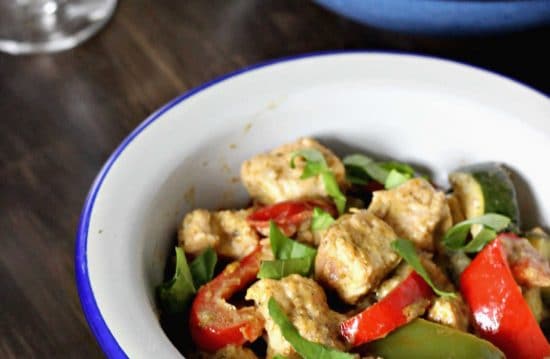 Enjoy this delicious vegan Quorn recipe, that cooks in one pot in just 15 minutes.

This dish is delicious served with pasta or rice, and salad, and has a lovely summery flavour.

To make this recipe zero-waste then simply adapt this recipe depending on what you have in your fridge. Have red pesto? Use that instead. Don’t have any peppers or courgettes? Other vegetables that lend themselves well to this dish include:

Want to make it vegetarian rather than vegan? Simply swap the vegan cream and pesto to vegetarian varieties.

The Zero-Waste Chef also has a great recipe for zero-waste vegetable stock, that is well worth checking out.

If you are looking for more one-pot vegan Quorn dishes then do check out my Quorn lime and coconut vegan curry recipe. It’s another great midweek staple, that comes together really quickly!

Quorn also have a great vegan recipe section on their website that is well worth a peruse for vegan Quorn recipe ideas.