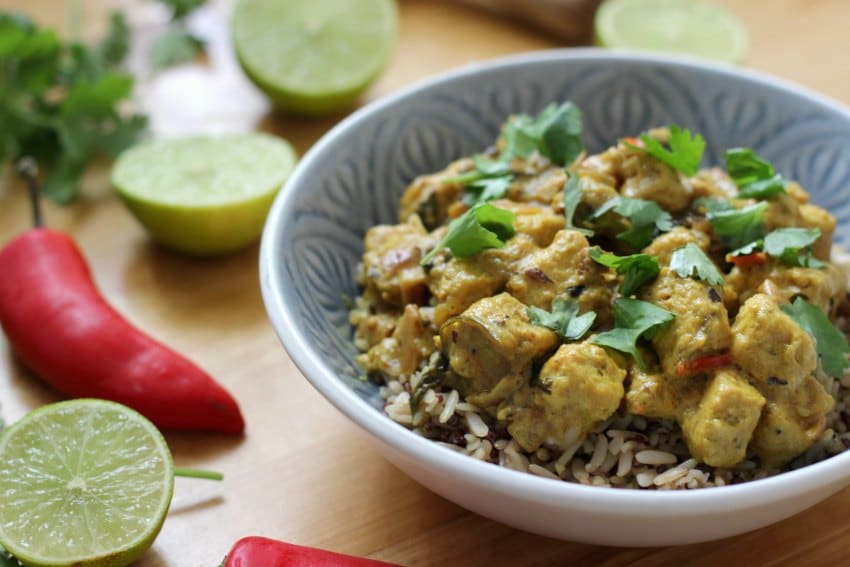 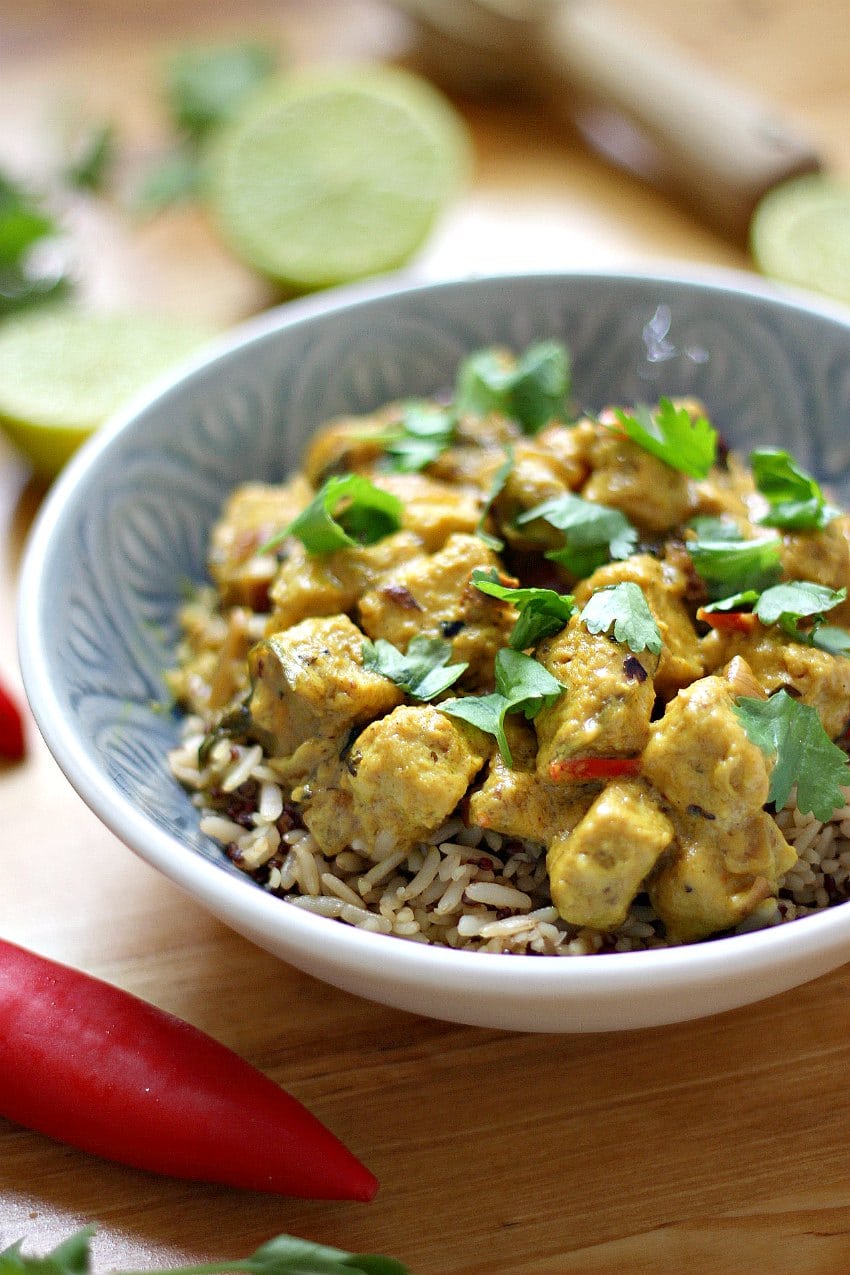 You may remember a few weeks ago I got to chat with Ben Fogle about all things flexitarianism.  Ben had been filming a short video for Quorn with Duncan Williamson, WWF UK’s Food Policy Manager, when I got the exciting chance to catch up with him, and I’m really pleased to say the final video is now ready.

In the video, Ben and Duncan discuss the impact of our modern, meat-eating diets on the planet and how meat reduction could be healthier for us and for the environment. I always find it’s food for thought to find that switching to one or two meat-free meals a week could significantly reduce your carbon footprint. Duncan points out that food production is responsible for 69% of water usage, and Quorn’s research has found that one quarter pounder burger requires 2,800 litres of water – that’s 11,200 cups of tea or 45 personal showers! So even more reason to try and go meat-free once or twice a week.

As I eluded to in the first post, I’m a huge fan of Quorn, and found it invaluable in my transition from firstly meat eater to flexitarian, and then from flexitarian to vegetarian.

Whilst I’ve been vegetarian for 12 years now, right now I am trying to incorporate a more vegan diet into my life.  Whilst I don’t know if I will ever be 100% vegan, reducing my consumption of dairy where I can is something I am definitely on board with.

Whilst a lot of Quorn products do contain small amounts of egg white or milk ingredients, thankfully Quorn has developed a great vegan range, including my beloved Fishless Fingers, that is expanding all the time (and you don’t have to be vegan to enjoy!).

I find Quorn particularly invaluable when I want something quick, easy and tasty during the week, after a long day at work.  The ability to take something protein-packed from the freezer to create a healthy dinner when I’m time-pressed is something that makes my life so much easier!

One of my favourite midweek meals to cook is this tasty lime and coconut vegan curry, that’s made with Quorn Vegan Pieces.  As well as being downright delicious, the dish comes together in about 20 minutes and uses just one pot.  My kind of midweek meal! 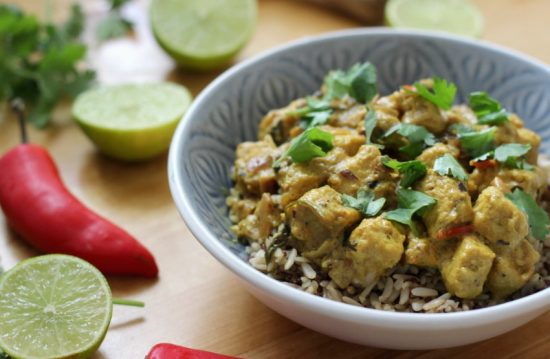 Make this delicious vegan lime and coconut curry, made with Quorn Vegan Pieces. The dish is made in one pan in just 20 minutes, making it perfect for a no-fuss, tasty weeknight dinner.
Prep Time 3 minutes
Cook Time 20 minutes
Servings 3 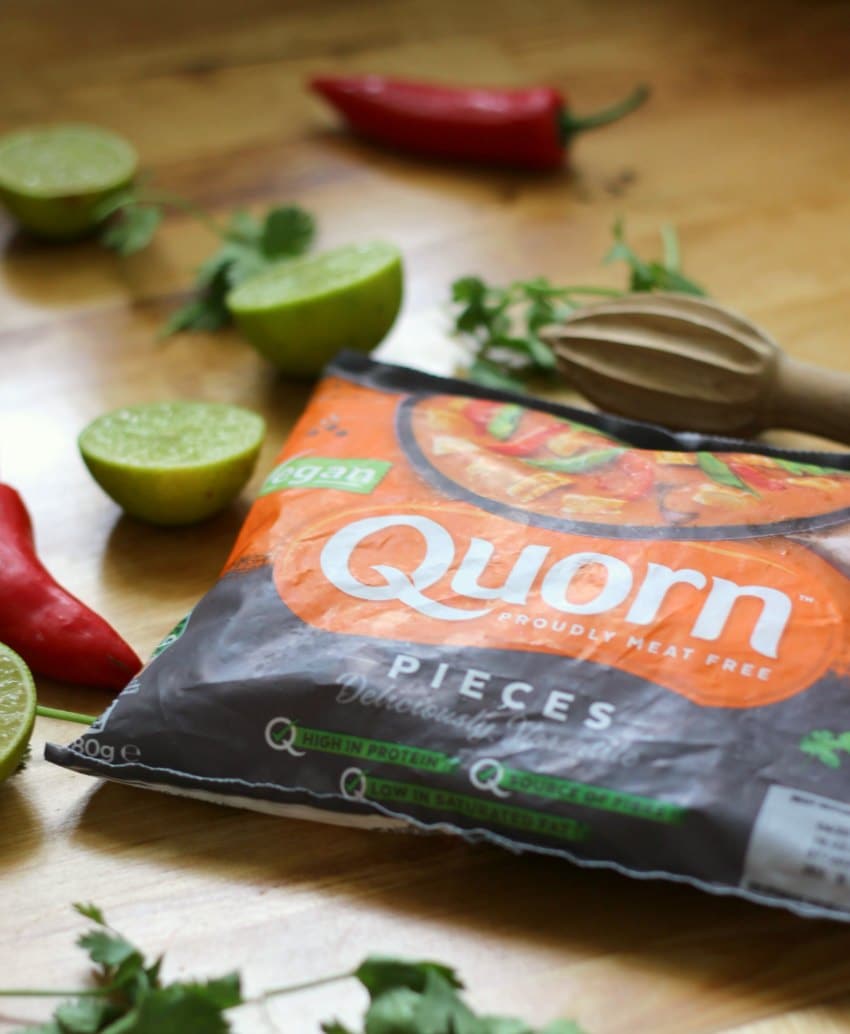 AD | Getting Meaty with Ben Fogle and Quorn 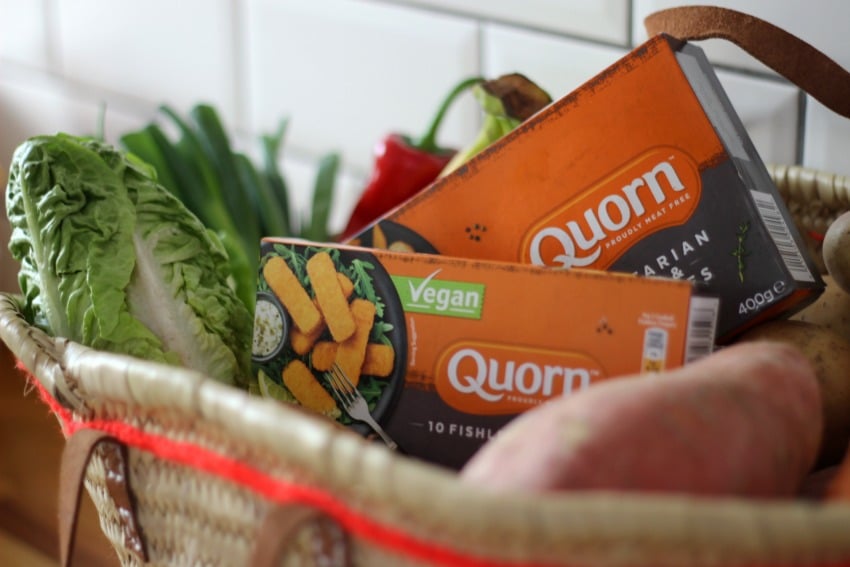 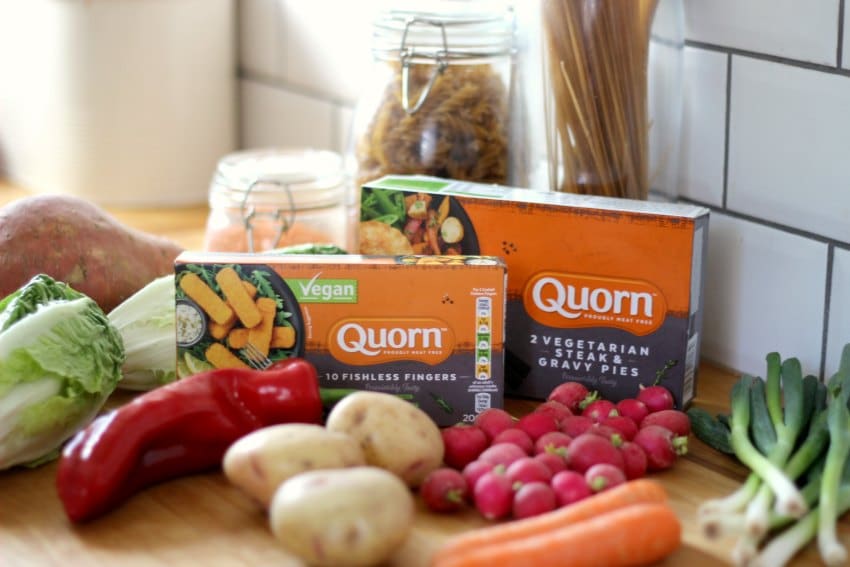 What are your thoughts on meat?  Are you a vegan, vegetarian, a meat with every meal kind of person, or somewhere in between?

I’m a vegetarian and have been for going on 12 years now, but I’m not pious about it.  It personally doesn’t bother me if I’m out to lunch or dinner with friends and someone sitting next to me is tucking into a steak.  I’m even happy to cook meat for friends or family that come over for food and don’t want to eat a vegetarian meal.

I understand that not everyone wants to be vegetarian or vegan, or even can be for health reasons, and I would never preach to people about why they should stop eating meat altogether.  What I do believe is that the most realistic and sustainable solution would be if everyone just ate less meat – even just by having one meat-free day a week.

So, as you can imagine, it was really exciting when Quorn, the leading meat alternative brand, got in touch with me to see if I would like to chat to one of my long-term favourites, Ben Fogle, about eating less meat and how that relates to sustainability.  I was also interested to find out how, as a meat eater, Ben has got on reducing his and his family’s meat intake.

I caught up with Ben after a day’s filming at the WWF UK Headquarters in Surrey, where he had met with Duncan Williamson, the food policy manager at WWF UK to film a short video for Quorn on the environmental impact of meat production.

The finished video of Ben and Duncan is currently in production,  but I’ll share it here on the blog in a few weeks time.  It’s sure to be a good one!

If Ben has inspired you to eat less meat, you could join the 35% of the UK’s population who identify themselves as semi-vegetarian (or flexitarian to give it it’s proper name) – where you still eat meat, but with less frequency.

My top tip for embracing flexitarianism is to start small: start with one meat-free dinner a week, then after a while see if you can make it a meat-free day.  If you want to introduce other meat-free days into your week then great, but if one feels plenty then stick with that.  It’s about what feels right for you.

I personally started out as a flexitarian in my mid-teens, long before I knew the proper term for it.  I started eating fewer meat-based meals at around age 15.   At the time I had given vegetarianism a fleeting thought, but the jump between someone who ate meat for every meal to eating no meat at all felt like too large a leap for me.

Then, after moving out of my parent’s house at age 17 to go to university I rarely, if ever, bought meat to cook and consume at home due to my somewhat limited student budget.  My meat consumption was limited to the rare occasions when I ate out, and my spell of working as a waitress, when I would practically inhale the meat-based meal kindly provided by the kitchen staff after being on my feet for 8 hours.

After ten years of eating less meat, I then decided to become vegetarian at 25, mostly motivated by the links between meat consumption and climate change.  As Ben discusses in the video, he learned that the global livestock industry produces more greenhouse gas emissions than all cars, planes, trains, and ships combined.  I was working as a climate change researcher for a university at the time and the more I learned, the more I wanted to cut meat out of my diet completely.  Because I had eaten less meat for 10 years, the jump to vegetarianism was an easy one for me.

Something that I found helpful in my transition, first to flexitarianism, and then later to vegetarianism, was Quorn, the meat-free substitute.

I found that in particular Quorn sausages, mince and fillets were handy things to have in the freezer when I wanted to rustle up something protein packed quickly and easily.  What I also appreciated is that Quorn is a highly sustainable source of protein.  Quorn mince, for example (which makes for a wonderful ingredient in chili or spaghetti bolognese) produces 90% less CO2 emissions than minced beef, and is very efficient in its land and water usage.  Their latest sustainability report makes for an interesting read if you would like to learn more.

Even now, Quorn is something I turn to frequently.  I do like to cook from scratch, but as working parents, we don’t always have the time or energy to do so after a long day at work, so having a back-up in the freezer is a godsend.

My current favourite is Quorn Fishless Fingers – vegan fish fingers that taste delicious drizzled with a wedge of lemon and served alongside chunky chips and peas.  True comfort food that the whole family enjoys!  On road trips, we’ll often pack some Quorn Picnic Eggs and Cocktail Sausages and the four of us will fight over who gets to eat the last ones.

Let me know what you thought of the video with Ben Fogle – and if there is anything you would have loved to have asked Ben!

I also can’t wait to share the finished video with Ben and Duncan – so do stay tuned!