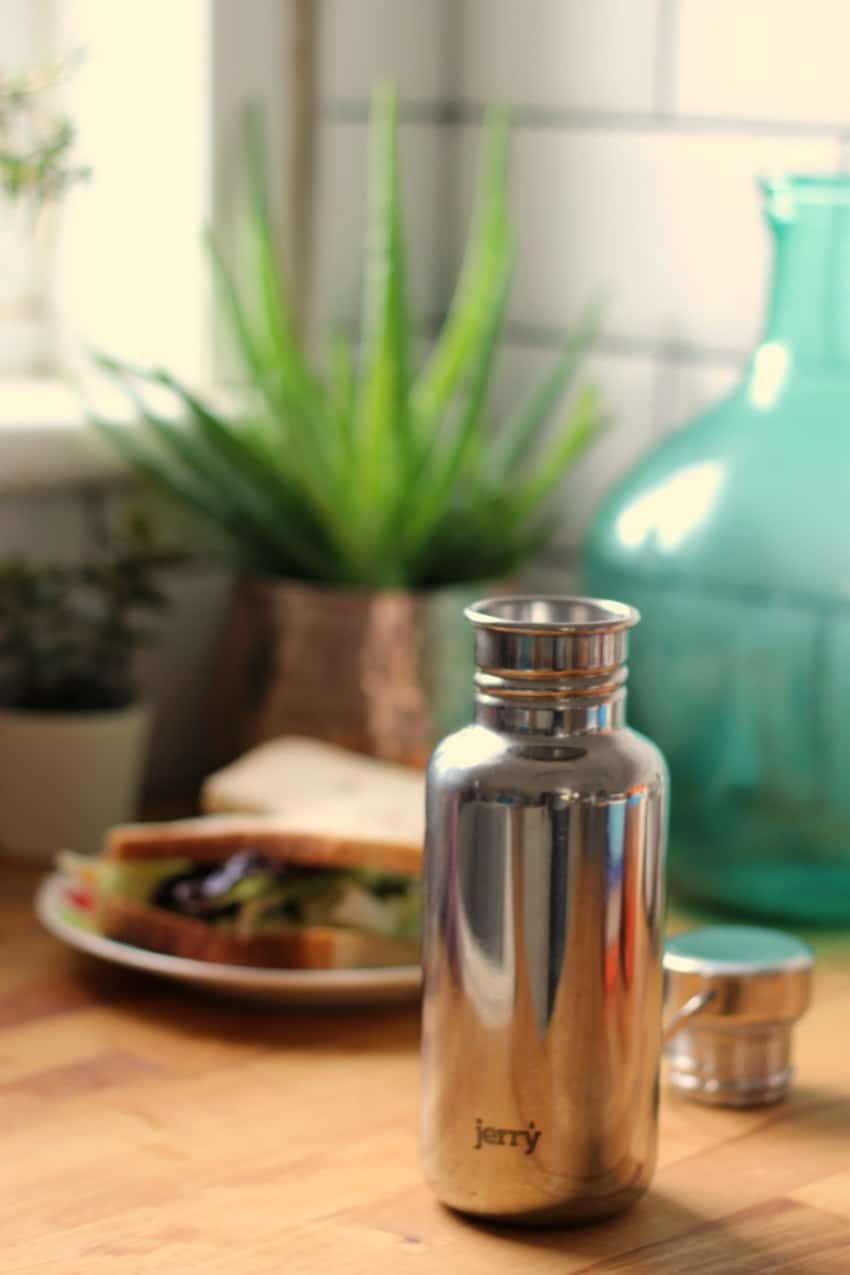 Hello!  Let’s talk eco friendly lunch supplies today.  I have gotten much better at packing my own lunch for work since going back after being on maternity leave, but some of my lunchware leaves a lot to be desired.  We have a lot of red stained plastic tupperware boxes that I’d like to replace with something a bit more durable once they wear out.  I’d actually like to replace all of our plastic tupperware as we go with glass and stainless steel containers, but at the same time I don’t want to throw out perfectly good tupperware, so it’s going to be a bit of a long process!

If you’re looking for some eco friendly lunch supplies ideas too then I’ve put a guide together of some things that have caught my eye over the last little while: Reusable Cutlery Set (£12.50) – a pretty little cutlery set perfect for stashing in your bag or in your desk drawer.

KeepCup (£16) – like treating yourself to a takeaway tea or coffee at work?  Why not invest in a beautiful KeepCup?  Some coffee shops will even give you a discount for using a resusable cup, so over time the cup will eventually pay for itself.  Win win!

Black+Blum Thermos Flask (£14.95) – if you’re the thriftier sort, then here’s a stylish flask for your commute.  I’m quite partial to a cuppa on the bus to work of a morning so for me this is an essential!  A flask is also handy when you’ve having the kind of day that requires a cup of tea constantly to hand, but you don’t want to be walking back and forth to the kitchen every half an hour to make tea.

Black+Blum Thermo Pot (£29.95) – I have my eyes on one of these stainless steel beauties.  I eat a lot of the previous night’s leftovers for my lunch.  In fact, we’ve got into a habit of making a little bit more dinner so that be both have enough to take to work the next day for lunch.  Sometimes I use tupperware, and sometimes I use a glass jar to transport my food but this looks sturdier and has the added bonus that you can heat up your food in the morning and have a hot lunch at work without having to wait in the microwave queue.

LunchBots Stainless Steel Lunch Box (£32.00) (10% discount with first order) – this stainless steel bento box is exactly what I’d like to replace my tupperware sandwich box with.  It’s perfect for fitting in a sandwich and a couple of snacks on the side.

Jerry Bottle (£17.99) – Jerry Bottles are the ultimate water bottle.  Beautiful.  Plastic free.  Leak proof.  And 100% of profits go to funding clean water projects around the world.  On the base of each bottle is a set of co-ordinates pinpointing exactly which village your purchase is helping to fund clean water in.  Each bottle also comes with a lifetime guarantee.  Water bottles don’t get better than this.

Keep Leaf Sandwich Bag (£6) – if you don’t like carrying a lunchbox around then a good alternative is a sandwich bag.  This reusable sandwich bag makes for a good eco friendly alternative to plastic zip lock bags or cling film/tin foil.

What are your favourite eco friendly lunch supplies?

ps:  you might also be interested in my beeswax food wrap DIY as a homemade alternative to cling film. 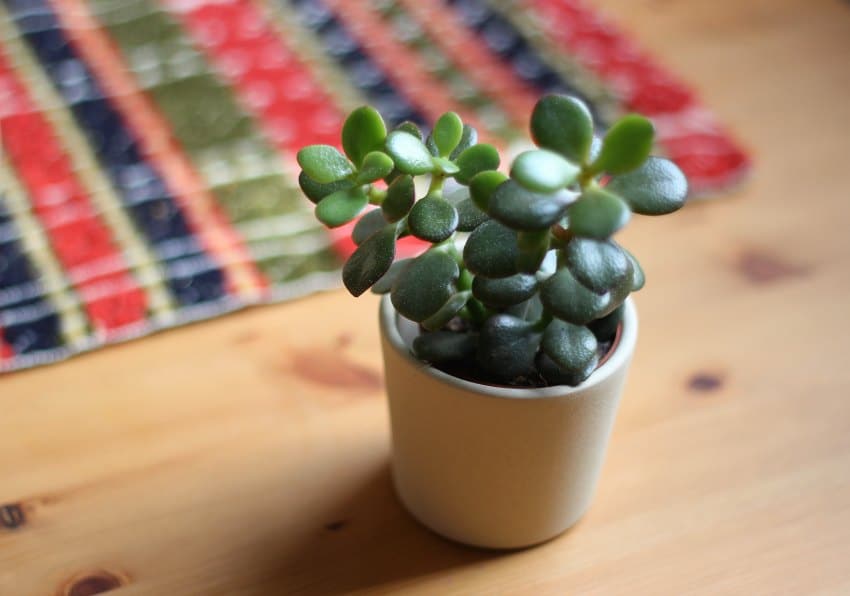 Our house isn’t a tiny house per se, but it’s by no means a big house.  When first build in the 1920’s it was a one bedroomed cottage.  It’s gradually been extended over the years, upwards and outwards to be 3 bedroomed, but even then it has a small footprint.  Let’s just say our youngest daughter’s bedroom doubles as an office and music room for my partner’s musical endeavours.  It’s a good thing she’s not old enough to be bothered by these things!

We do love our house, but with four of us living here (plus pets) we do get on top of each other a bit.  We’ve had to learn some clever tricks to maximise the space so as not to want to kill each other on a regular basis.

My first post of our small house hacks series is of the baby variety.

I was kindly given some Amazon vouchers as a gift from my work when I had my youngest.  I sat on them for a while, as we kept a lot of our old baby gear and we felt there was nothing we didn’t already have or could borrow.  As we hit the weaning stage at 6 months I knew we needed a highchair of sorts, and that’s where the vouchers came in.

With my eldest we had a wooden highchair that although looked lovely, was a pain in the bum all round.  Our little Houdini managed to get out of the straps from an early age, it was a nightmare to get into the nooks and crannies to clean, and it took up a lot of room in our living room.  I cursed the thing with ALL the swear words on a daily basis after constantly stubbing my toe on it.

Second time round I was adamant to go for function over style, and would not entertain a wooden highchair, as pretty as they are.  And with no room to spare for even a folding high chair, I decided to look into travel high chairs.  I came across this iSafe one, and thought it fitted the bill perfectly. The iSafe travel highchair is pretty amazing.   It takes up precisely zero floor space. It fixes securely to the table and my daughter can’t get out of the straps.  We can take it off and take it to grandparents houses.  And, for the biggie, when it gets dirty (which is often) you can pop it in the washing machine and it comes out spotless.  We’ve been using it for 8 months now and it still looks like new, unlike the wooden high chair, which by this stage was completely encrusted in various unidentifiable foodstuffs.

We haven’t bought many baby things this time around, but it’s safe to say this is my favourite purchase.  My daughter seems really happy in it too – she gets to sit right beside us and her big sister at mealtimes, and has a presiding view right over the dinner table.  It’s her happy place, I’m sure.

I used Amazon because I had vouchers to use there, but I wouldn’t normally use Amazon.  You can purchase the iSafe highchair directly from Baby Travel if you want to cut out the Amazon shaped middleman.

If you have any small house hacks you want to share, do pop them in the comments below!