Looking for the best eco-friendly and ethical men’s underwear?  Read on for my top recommendations!

The other week I did a run-down of where to buy ethical women’s underwear.  In it, I promised I would write a guide to men’s ethical underwear too.  So, true to my word, here is a guide to some of the ethical options for male pants, briefs, and boxers, depending on your preference.  I’ve also updated the article for 2022 so that it is bang up to date.

As always seems to be the case when it comes to men’s ethical apparel, the market for ethical men’s underwear is considerably smaller than the women’s ethical market.  So you are a little more constrained.  But don’t despair – I’ve tracked down some great companies for you today.

This post contains affiliate links, denoted by *, which means if you purchase any items using the links in my post I may receive a small percentage of the sale. This helps support the running costs of Moral Fibres.

The Ethical Men’s Underwear Brands to Check Out

Plymouth-based Bam: Bamboo* pants and boxers are made of exactly what the name suggests: bamboo (as well as being blended with a bit of cotton!).  These have rave reviews from sportsmen and outdoorsy types looking for ethical high-performance technical men’s underwear in basic colourways.

Their boxers and pants are ethically produced in Europe and Turkey, with prices range from £12 to £18.  Additionally, a mix and match service is offered where if you buy 3 selected garments you receive 20% off.

All Boody* garments are made from organically grown bamboo and are produced adhering to the highest standards for both the planet and for their workers.  They’re both certified as Ecocert and Peta-approved vegan.

Their organic briefs and boxers cover sizes XS to XL, with prices from £13.95.  Take 10% off your first order when you sign up to their mailing list.

Living Crafts is a German-based company that makes ethically produced basic pants, trunks, and boxer shorts.  These are available in the UK online via By Nature, from £8.95.

Organic Basics* pride themselves on selling, well, sustainable basics fairly made in Europe from GOTS certified organic cotton.  As such, they offer basic colours, timeless styles, and no seasonal collections to minimise wastage.  With a range of sizes from S to XXL, they cover a range of shapes and sizes.  Prices for underwear range from £30 for a pack of two organic cotton boxer shorts, upwards.  Use discount code WENDYOBC to take 10% off your order.

Peau Ethique is a French-based mother and daughter company, specialising in underwear.  With transparent and ethical operating procedures, your pants and conscience can be clear!  Again, their men’s ethical underwear is available in the UK through FabOrganics, who have a very limited selection of, ahem, one basic pair of boxer shorts.  The boxers are currently in the sale for £13.75.

WAMA hemp underwear* is a new one for me in the ethical men’s underwear arena.  They make soft and stretchy men’s boxers, trunks, and briefs from hemp, a crop that generally requires no pesticides and very little water, and renews the soil with each growth cycle.

The downside is that WAMA ships their underwear from America.  Worldwide shipping is a flat fee of $20, regardless of the order value, but bear in mind you may have to pay a customs charge on your order if you are in the UK.

I hope you’ve found this guide to ethical men’s underwear helpful!  Let me know if you find any other makers/stockists in the comments below and I’ll be sure to update the article! 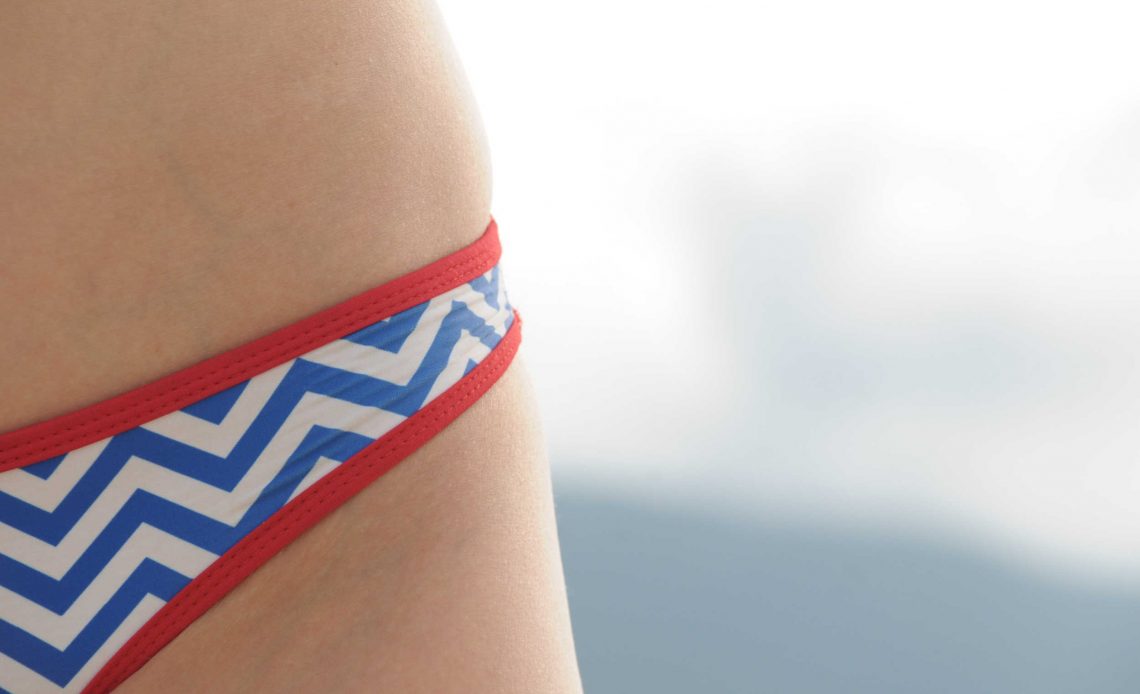 ‘Where can I buy ethical women’s undies?’ is one of my most asked questions by Moral Fibres readers, so I thought I’d put together a roundup of some of the options out there today.  Guys, don’t feel left out, I have written a men’s ethical underwear post just for you!

Please note this article was written in 2013, and is now out of date.  I’m no longer updating it, but I do have a new post on women’s ethical underwear updated for 2021 that you should visit instead!

When buying clothing I would normally always suggest buying secondhand where possible.  However, the thought of wearing secondhand undies makes me feel a little green (and NOT in the eco sense!).  Therefore it’s one area where you have my full consent to buy brand new.

The ethical undies market sells more than just large, white granny pants as you might imagine.  All of the ethical underwear featured here today is fun, modern, and sexy, as well as practical.

Ciel sell the most beautiful Liberty print knickers, from £24.  With a rigorous ethical policy you can be sure that your undies are as ethical as they come. 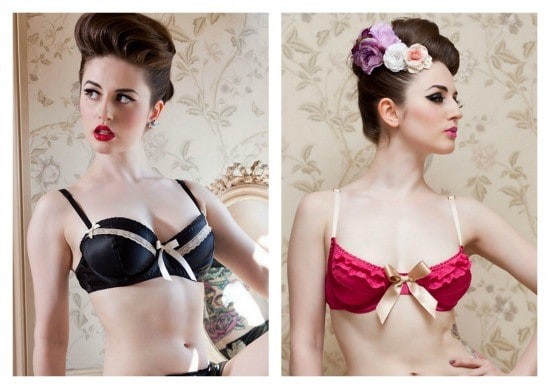 Saumarez make some really sexy underwear, which will challenge any preconceptions you may have of ethical underwear.  This Mya bra (left, £10) is both sexy and sophisticated.  Meanwhile, this Nicola bra (right, £40) is full-on fun.  They also have some great knickers that are worth taking a look at. 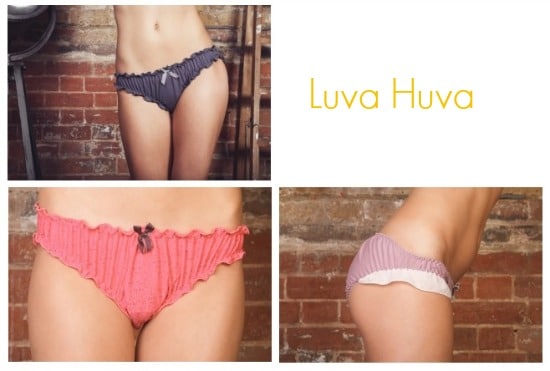 Luva Huva have a great collection of fun and modern everyday ethical knickers.  A triple set of knickers is currently £28, including the bottom left pair.  The purple Juliet knickers are £14 and the cute frilly ones are £16.  They do sell bras but they don’t seem to come in different sizes according to your back size, which for some might be a sticking point.

Who Made Your Pants

Who Made Your Pants buy their fabric from lingerie companies at the end of the season – saving the fabric from landfill.  All pants are made in the UK – in Southampton – where all the makers are women who have come from troubled backgrounds.  They say that the first job new employees learn is how to make the pants.  They then hope that all jobs within the business can be filled by the women as they gain skills.  So, if someone is interested in marketing or finance, they”ll arrange training.  I think this is a fantastic business ethos.

2016 edit: sadly Who Made Your Pants have stopped trading.

Also worth mentioning are Thunderpants UK, who sell lovely big ethical undies.  Thunderpants say their pants will not go up your bum, which we all appreciate in a pant! And finally, for pregnant and breastfeeding mothers Lorna Drew nursing bras, available from around £29, are practical and ethical, and expand over three cup sizes to accommodate your changing shape, making them great value too.

If you’re a DD+ cup size like me (thanks pregnancy and breastfeeding) then I am afraid I don’t think there is such a thing an ethical plus size bra.  Despite a lot of searching I have not found one yet.  My best advice is therefore to spend as much money as you can afford on a well made comfortable bra, and get properly fitted for it by a professional to ensure the longevity of your purchase.  I buy all of mine from Marks and Spencer* because I know they fit, are supportive and comfortable and last.  In my youth I tried cheaper bras from Topshop and inevitably they barely lasted a few months.  I also memorably bought one from Primark that lasted one wear as when I washed it the underwiring popped right out!  The cost per wear on that one was through the roof!