Save Energy With One Simple Step #8 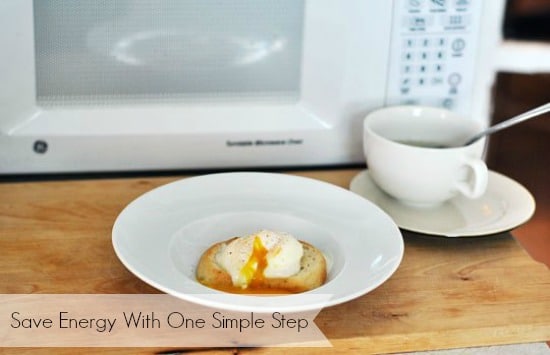 We’re up to tip number 8 of my Save Energy With One Simple Step series.  That’s a whole lot of potential energy savings to be made without doing an awful lot!

Today’s tip is about saving energy in the kitchen.  Which, whatever form of energy you’re talking about, then I am all for!

I don’t know how you feel about microwaves.  Growing up we never had one as my parents worried about “rays”, and I never had one myself until my mid-twenties.  Then, when I worked in my first proper job I treated myself to one, and I’ve never been without one since.  I still don’t know about the “rays” (high-frequency radio waves) but what I do know is that modern microwaves can use around 50 to 65% less energy than an oven to cook your food, depending on what you’re cooking (according to the Consumer Energy Centre).

You see, microwaves work by using those high-frequency radio waves to heat water molecules inside the food.  This makes them ideal for cooking small quantities of food, very quickly.  With small quantities of food, not only do they cook in minutes (or less) but you’re also saving energy through the fact that you don’t need to preheat your oven.  My electric oven takes an age to heat up (15 minutes or so to 200 degrees C) so for every portion of food I cook in the microwave, I’m saving at least 25 minutes of oven electricity.

For large quantities of food, then it’s always more efficient to use your hob or oven, due to the larger content of water molecules and the differing way that hobs and ovens cook food.  In terms of energy efficiency – microwaves are the most energy efficient, followed by hobs, followed by ovens.  So look to cook your food on the hob first, before the oven, if you can.

And today, as I’m in a good mood, I’ll give you two tips for the price of one: remember to switch your microwave off at the wall when you’re done so you’re not wasting energy powering the microwave’s clock!

AND as I feel like spoiling you even more, here’s a link to some surprising uses for microwaves, including sterilising sponges without the use of bleach, and sterilising garden soil to make it fit for planting seedlings in.  Don’t say I’m not good to you!

See you next Thursday for the next tip, in the meantime keep your eye out for my next post, coming up shortly! 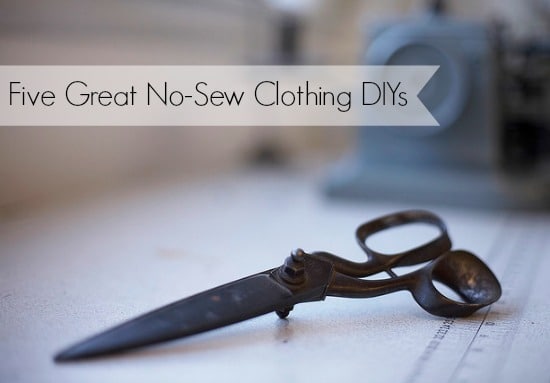 I like crafting as much as the next person but I’m the first to admit that my sewing machine skills and needlework leaves a lot to be desired!  I shared some of my top DIYs for repurposing old clothes a little while ago, and some of these involved sewing, so since then I’ve been on the hunt for some relatively straightforward no sew clothing diys.  I found quite a few good no sew ones and thought I’d share my five favourites with you in case there are any other crafting novices reading along: These no-sew elbow patches from the ladies at Honestly WTF are brilliant and are a great way for a crafting novice to add an individual touch to their clothing.

They cleverly use cookie cutters to get the perfect shape: As well as hearts, you could use any cookie cutter shape – from classic ovals to stars and anything else that catches your fancy.

It would be a great way to cover up any holes on your favourite cardigan or jumper, and to personalise baby tops and vests for a special gift.  I’m thinking dinosaur cookie cutters for this!  Full instructions are over on Honestly WTF. This cute no-sew pocket diy from Oh The Lovely Things is a great way to bring new life into an old or plain top, or to cover up a stain or hole.  I plan on doing this very very soon! This DIY for no-sew scalloped shorts from Making Nice In The Midwest is a great and easy way to update some trousers or shorts.  Although it looks complicated (to me!) to get the perfect scallops, it turns out that all you need is a jar lid: I love the idea of painting a top with bleach from the crafty girls at A Beautiful Mess.  So striking, yet so simple!  A great way to update a plain top or to disguise a bleach stain on an item of clothing.

This is one of the easiest DIYs ever, from A Pair & A Spare.  All you need is a shirt and some studs and you’re good to go.  It’s a great way to liven up a plain shirt, and also when you’ve annoyingly lost a button and can’t find one to match the others – just cover them up with studs!

Will you be trying any of these out?  Or found any other good no sew DIYs?  Do share in the comments below!

Main image from here, all others from the respective blogs.

ps: if you enjoyed this post I’ve put together five more no sew clothing DIYs for you!