It’s that time of year again. Christmas is less than 6 weeks away! As such, I’ve put together my annual ethical Christmas gift guide packed full of ethical ideas for him, her, and for little ones.  From vegan, to palm oil-free, to plastic-free, to zero waste, to organic, I hope there’s something here for everyone.

I don’t subscribe to the idea that you should spend lots of money at Christmas. Therefore, all of my ideas are around the £30 mark or less and start from just £8.

For Him and Her

DIY origami paper lamp kit* (£19.95) from OWL Paper Lamps.  I love this paper lamp kit that you make yourself (full instructions provided!).  Please note, this item ships from Portugal so bear this in mind with shipping times.

Stainless Steel Lunchbox* (£18) by Green Tulip.  A great gift for anyone.  I have a stainless steel lunchbox that I use for work that my partner pinches on a regular basis!

Soap, candle, and flannel gift set* (£21.50) from Soapdaze.  I love Soapdaze, and this gift box packed with a vegan candle, handknitted facecloth, and vegan soap is a lovely gift for someone that deserves a good pampering.

Beeswax Food Wraps (£15) from Abeego.  I love my beeswax wraps, and I think they made a lovely gift.  Alternatively, you can make your own wraps. It’s really easy – promise!

Succulent enamel pins* from Katy Pillinger Designs (£18 for 3).  A cute gift for your friends.  Split them up so you all have one each, or give them all to one lucky recipient.

Fresh Clean Home (from £8.30). Currently reduced on Amazon* but also available at other retailers.  I have it on very good authority that this book is brilliant for anyone that’s keen to give making their own cleaning products a go ;)  You could even gift it with some amber spray bottles* and/or a bottle of liquid castile soap*.

Vegan and Palm Oil Free Pamper Gift Set (£18.70) from Bloomtown.  Vegan?  Check.  Palm oil-free? Check.  This gift set is perfect for anyone looking to indulge in a bit of natural beauty.

The Danish Art of Whittling (RRP £9.99).  I have been ogling this in my local bookshop and it looks like a wonderful guide to whittling (my new found favourite hobby).

Safety Razor* (£32.50) from Wearth.  For anyone looking to swap from plastic razors.

Bamboo Multi-Tool* (£15).  I  have one of those for my bike and it’s by far one of the most useful things I carry with me on a daily basis, and not just for my bike.  There are few things you can’t mend with a multi-tool!

Guppy Friend* (£25) from Ethical Superstore.  For ocean conscious pals that want to help stop microfibres from their laundry.

Georganics Tooth Care Set (£19.90)* – A complete oral care gift set for anyone that wants to green their dental routine.

Pretend Play Kitchenware Set* (£29.99) from Toby Tiger.  This sweet set contains enamel pans and metal utensils, and it’s so lovely to find a plastic-free set.  I could imagine this being a lovely hand me down set that will last for decades.

The Lorax: How To Save The Planet Edition* (£11.41) from Harper Collins. We have this book and my kids love it.  As well as containing the classic Lorax story from Dr Seuss, it’s also packed full of ideas on how kids can help the environment.

Paper Bead Craft Kit* (£11.95) from Ethical Superstore.  Is there a kid that doesn’t love crafting?  I certainly haven’t met one yet.  This kit allows kids to make beads from recycled paper, which can then be used to make jewellery.  Hopefully, adults can get a shot too!

Banana Pyjamas* (£19.99) from Toby Tiger.  These fun GOTS certified organic cotton are sure to be a hit at bedtime.  These beauties come in lots of other fun patterns too.

Recycled Fire Engine (£19.95) from Ethical Superstore.  This cute fire engine is made from recycled milk bottles and is sure to provide tons of fun.

ps: here are 10 zero-waste and plastic-free shops on Etsy if you’re looking for more low impact gift ideas, and here are some more lovely kids eco-friendly gift ideas.  I also have a great post on how to shop ethically online.

Do also check out my guide on how to have an ethical Christmas (without the stress).

Where to Buy Palm Oil Free Mince Pies This Christmas 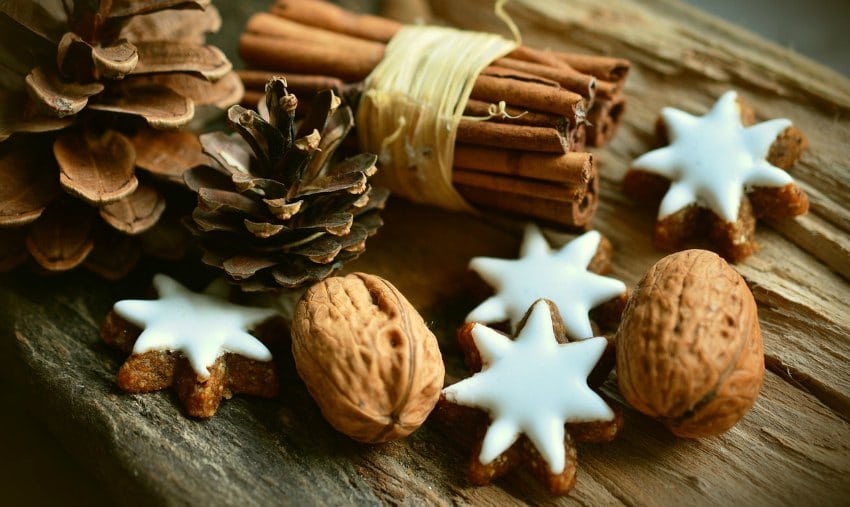 Want to know where to buy palm oil free mince pies?  Read on!

Crumbly pastry that melts in the mouth.  Juicy berries with a hint of spice. The tang of brandy.  Served hot and drizzled with cream.  Nothing quite says Christmas like a mince pie.  This seemingly simple festive snack is available in every supermarket.  However, it has a complex journey involving many people, businesses, and resources.  But it’s one ingredient – palm oil – which links this humble pie to deforestation, human rights abuses, and climate change.

As such, Georgina Rawes from Ethical Consumer looks into the issues behind palm oil production and shares her top five palm oil free mince pies.

The problem with palm oil

Palm oil is found in around half of all packaged foods and in many other household items, from cleaners to cosmetics.  This is because it is cheap, widely available, and solid at room temperature.  All of this makes it an appealing fat for manufacturers to use.

In mince pies, palm oil is found in the vegetable suet used to make the mincemeat.  It gives the juicy filling the firm and creamy texture that we all love.  However, there is a bitter and unpleasant story behind this popular ingredient.

Over 90% of the world’s palm oil is grown in Indonesia and Malaysia, across 16 million acres of land.  As plantations grow to meet demand, they claim rainforest, razing them to gain valuable farmland.  In fact, palm oil plantations are one of the leading causes of deforestation, forcing indigenous people from their homes and threatening endangered species living in these diverse ecosystems.

As rainforests are cleared, carbon dioxide is released.  In fact, deforestation accounts for 10% of all greenhouse gas emissions and is a major contributor to global warming.

This is particularly pronounced in Indonesia.  The United Nations Environment Programme (UNEP) worryingly indicates that 98% of Indonesia’s rainforests may be gone in the next four years.

As well as the clear issues involved in deforestation, palm oil production is riddled with supply chain management issues.  There are an estimated 3.5 million workers employed on Indonesian and Malaysian plantations.  Plantations where child labour and modern-day slavery still occur.

What about sustainable palm oil?

Many products now state that they contain sustainable palm oil.  Whilst this seems to be a good thing, the reality is more complicated.

Certification groups, such as the Roundtable on Sustainable Palm Oil (RSPO) have been criticised for not going far enough to ensure that members are acting responsibly. There are also RSPO members who have been exposed as having environmental abuses and human rights issues in their palm oil supply chains.

So, where products seem to contain sustainable palm oil that is not linked to deforestation, this might not actually be the case.  As such, action groups such as Sum of Us, are campaigning for RSPO to vote to adopt a no deforestation, no peatland, no exploitation certification system. Whilst campaigners continue to put pressure on the palm oil industry to clean up its act, we recommend avoiding this problem ingredient for now.  Happily, when it comes to mince pies, we have found a great palm oil-free selection.  Check out of our top five palm oil free mince pies:

Organic and made with sunflower oil instead of palm oil.  What’s more, these pies come in 100% recyclable packaging and are priced at £2.50 for four. Available from Waitrose online and in-store.

Perfect for parties, these mini versions of a classic come in three varieties.  They contain rapeseed oil and are suitable for vegetarians, and cost £16.00 for 36.  Available from Marks & Spencer online and in-store.

These handmade mince pies are equally at home on the dinner table as they are beside a cup of tea.  Beautifully finished, they are made with sunflower oil and are available through organic retailer Abel & Cole at £5.39 for a pack of six.

These pies contain no additional fats in the mincemeat, only fruity fillings.  They are available through ethical online retailers Real Foods, priced at £5.95 for six pies.

Organic, vegan, and gluten-free, these mince pies tick all the boxes.  They contain no added sugar and are made with cold-pressed olive oil in place of palm oil.  Available online at Artisan Bread Organic at £5.25 for a pack of six.

For more information on palm oil, check out our full special report.