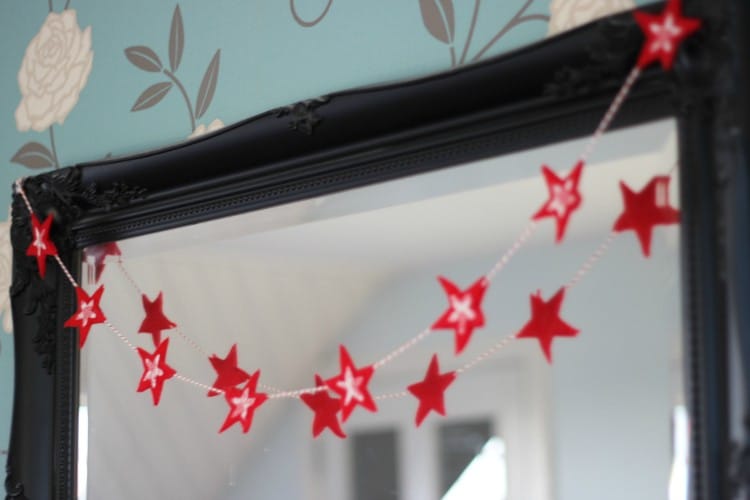 Hello!  Hope you all had a lovely Christmas and New Year!

Ours was just as we like it – not too fussy, with lots of good food and drink, and our loved ones around.  We ended up hosting family over three days, which was good fun.

I didn’t take a lot of photos – I was too busy eating, or with a glass of prosecco in my hand! However I did capture a couple of snaps I thought I’d share:

A sneaky selfie from a work Christmas night out in the pinkest toilet I’ve ever been in (keeping it classy!)!

About five years ago I found a load of vintage tree decorations in my local charity shop for the princely sum of 10p each.  They give me so much joy every year I unpack them and hang them on the tree.  This cheeky Santa is my favourite:

My daughter says he’s her favourite too!  I think it’s his cheeky face that does it!

I got a couple of these bells in the same charity shop vintage bauble bonanza and managed to smash one a couple of years ago.  Devastated was not the word.  This remaining one is extra special:

I also had a few homemade decorations dotted around the place.  I made this little star garland two years ago out of scrap fabric, felt and a length of twine. I used a star cookie cutter set and traced out two large and one small star shapes.  I then just glued the small star shape on to one of the large star shapes, then glued the other large star shape on to the back, making sure I’d sandwiched the twine between them.  Hope I haven’t made that sound harder than it actually was to make!

My crafty endeavours don’t stretch that far though.  Every year I say I’m going to make a wreath and every year I never quite get round to it, so this year I admitted defeat and hung some mistletoe on our front door instead.

I never normally buy cut flowers, so sometimes I treat myself to one bunch of festive flowers for the house at Christmas time:

Over the festive period my daughter also had a birthday.  I decorated her cake with some bunting* and some felt bunnies* (* affiliate links) that I found on Etsy.  I bought the bunny cake topper for her 1st birthday cake.  Last year she went through a pirates phase, but this year I thought it would be nice to reinstate the bunnies as we are in a bit of a bunny phase at the moment.  Although annoyingly I could only find one of the bunnies!

She had a wonderful day, and she said the best bit was the cake and having all her grandparents over to see her!

Finally, after her birthday it was Hogmanay.  We’re not big New Year kind of people, so ours was a quiet affair, just how we like, it with some wine and a film.   And that was our festive period!  I’m a bit sad it’s over to be honest, and the tree is still up which is a rarity for us to be up at this point – probably because we’re in denial it’s over!

But 2015 is hopefully going to be an exciting year: I’ve got lots of great ideas for posts for the blog this year, and I’m looking forward to sharing my 2015 with you so do follow along.  Did you know you can join the Moral Fibres mailing list and receive every new post direct to your inbox for free?  I only post two to three times a week so you won’t be overrun with emails.  I’ve also recently changed the service which sends out the blog post emails, to one that has much more flexibility, so if you are a subscriber and you’d rather have a once a week digest then drop me an email and I can arrange that for you!

ps: as promised, the blog has had a bit of a facelift for the New Year!  What do you think?  And apologies, I’m still having issues with commenting.  I’ve tried everything I can to fix it and I think there may be a problem with my web host so do hold tight.  You can still write comments and they’ll still appear on the site – you’ll just get a “no data received” error message which you can just ignore!

Hello!  I just wanted to take a little time out to recap 2014, and to wish all Moral Fibres readers, old and new, a very merry Christmas and a Happy New Year!  Thanks so much for reading along this year. I am always so grateful and pleased to receive your blog comments, emails, tweets, Facebook comments, and more.

I’m taking time off from blogging over Christmas and New Year to focus on spending time with my family. However, I’ll be back early in the New Year with more posts!

2014 was an exciting year for Moral Fibres. From being voted Prime Location’s Eco Blog of the Year, to being featured as the Guardian’s Sustainable Blog of the Week. And to seeing my face in a magazine!  I also got the chance to write for the Huffington Post this year, which was exciting. I hope to write for them again as soon as I find some free time!

I’m hard pushed to pick my favourite posts from the year. Rather than recap my 2014 posts, I’d recommend having a snoop around the archives using the menu above. Alternatively, you can use the monthly archive feature in the righthand sidebar.  I have to say though that the Your Ethical Style series that I started this year has been a highlight. It’s been so interesting and inspiring seeing everyone’s take on ethical clothing and style.  I’m always looking for more people to take part in it – so whatever your age, sex, style, or location do drop me a line to take part!

On the cards for early 2015 is a bit of a site redesign.  The site has looked like this since I launched it nearly two years ago now (two!). It’s become a little creaky in places – with issues with commenting and more.  I’m really sorry about these issues. However, I’ve already started work on the new site and I hope to have its shiny new look up and running in early January!  If you can bear with me in the meantime, particularly with regards to commenting (if you leave a comment it does come through, in spite of the no data received message you’re getting) I will be forever grateful!  Also, if you visit the site one day and it looks a little odd it’s probably because I’m testing/tweaking the new site!

And there we have it – have a wonderful festive period, and see you all in 2015!  I am planning on eating my weight in mince pies and mulling all the things!  You? If you are in Edinburgh, I’d also always recommend the Christmas Market.