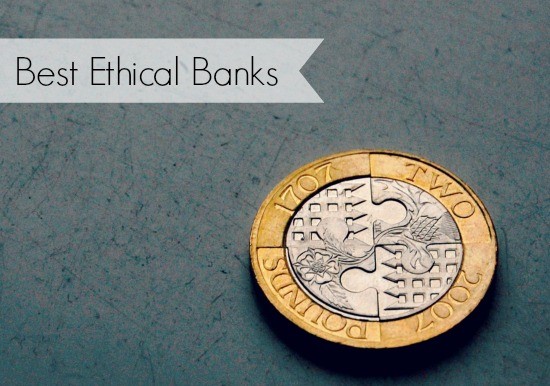 I hadn’t really thought about what banks invested in until a few years ago.  I just popped my money in the bank, took it out again, and so on, and that was that.  No thoughts about it, or how ethical the banks might be.  And then slowly I began to become aware of links with the high street banks to the arms trade and bomb-making, to speculation on food prices (pushing prices up), and to investment in environmentally damaging activities like oil and gas and tar sands mining.

Like most people, I find the world of banking confusing and difficult to navigate.  I had initially thought the Co-Operative Bank was the most ethical bank out there.  Indeed, we have a few financial services through the Co-Operative Bank, but surprisingly it turns out there are other more ethical banking alternatives out there.  So I have been doing a little bit of research into the best UK ethical banks which I thought I’d share here on Moral Fibres.  I found the Move Your Money website a good starting point, as well as my trusty favourite, the Ethical Consumer website.

Coventry Building Society (which has branches UK wide, despite the name) is ranked as the most ethical provider of current accounts by Ethical Consumer.  Quite a few other building societies also rank highly, including Cumberland, Leeds, and Nationwide.

The reason that building societies are more ethical than banks is that they face stringent regulations that limit the amount of money they can invest in certain industries.  Their profits are also invested back into the business for the benefit of borrowers and savers rather than shareholders, giving them that added edge.

Coventry Building Society ranks at 13.5 of the Ethical Consumer League Table (the top score being 20) – the Co-Operative Bank surprisingly ranks at 7.5, making them lower in the league table than the beleaguered Northern Rock, and only slightly higher than Santander.

Otherwise, the only other option is to bank with a credit union.  With more than 400 now active across the UK, credit unions are run as financial co-operatives owned and run by their members helping those on low-incomes get affordable credit.  Twenty-one of them offer current accounts – check here to see if there is a credit union near you that offers current accounts to its members. The ethical savings account market is wider than the current account market, and there are a lot of great innovative ways to ethically save your money.  As well as the regular building societies and the Salvation Army’s Reliance Bank, there are some other notable inclusions.  It’s important to bear in mind that with these options interest rates are not hugely competitive as they are unable to compete with the Big Five banks (Lloyds, RBS, HSBC, Barclays, and Standard Chartered), which own 85% of the banking sector, however, you are making an ethical difference with your money.

Ecology, Charity Bank, and Triodos top the ethical league table for Cash ISAs, with the building societies not too far behind.  The Reliance Bank also offers an ISA.