Looking for vegan and vegetarian slow cooker recipes?  I’ve got 25 right here for you!

Of all the appliances in my kitchen, it’s my slow cooker* that I love the most.  We use it at least three days a week, and there’s nothing quite like that smug feeling of sitting at work at 10 am knowing that dinner is all taken care of.

We were on the fence about buying a slow cooker for ages because we wondered just how much use we would get out of it.  Apparently, the average UK household has £415 worth of unused cooking gadgets and utensils in their kitchen.  I didn’t want my slow cooker to add to this!

Here are 25 vegan and vegetarian slow cooker recipes (after the jump) that will keep you going all autumn and winter!  I plan on trying each and every one of them!

This Butternut Squash Chili With Porter from Oh My Veggies is both vegetarian and vegan.   What’s more, it is flavoured with beer for a unique taste. Come summer try these Slow Cooker Aubergines from BBC Good Food.  It’s both gluten-free and vegetarian.  However, it can be made vegan by omitting the feta at the end.

I can’t wait to try this vegan and vegetarian-friendly Madras Curry from Peas & Crayons.  It looks so good!

Is it cold out?  Try this Sweet Potato and Coconut Curry from BBC Good Food.  It’s vegetarian and vegan, and sure to warm you up on the chilliest of days. If you weren’t feeling hungry before, you will be now.  These Mexican Quinoa Tacos look amazing!  They’re also gluten-free.

I did not know you can make mashed potatoes in a slow cooker!  Truly life-changing stuff!  The Garlic Mashed Potatoes from Damn Delicious are vegetarian.  Just remember to swap the Parmesan for vegetarian hard cheese! Dahl is one of my favourite vegan meals.  As such, this Red Lentil Dal from Cafe Johnsonia is first on my list of slow cooker recipes to make!

This  Tuscan Tortellini from Nosh and Nourish is vegetarian and looks divine.

I love chili and I love macaroni, but I have never thought to combine the two.  What have I been doing for the last 36 years?!  I’m trying this vegetarian slow-cooker recipe for Chili Macaroni from Kristine’s Kitchen. This Enchilada Orzo from Damn Delicious is vegetarian and looks in a similar vein to the chili macaroni.  Yum!

Another cold day classic, this Slow Cooker Tagine recipe from BBC Good Food is vegetarian and perfect for cold grey days when you feel like you need some spice!

This Pasta e Fagioli Soup from Kalyn’s Kitchen is on my list of things to make in my slow cooker.  Again, swap the Parmesan for vegetarian hard cheese to make it vegetarian.  It’s a pet peeve of mine that people forget that Parmesan isn’t vegetarian yet claim their dish is vegetarian.  It’s something to watch out for, particularly in restaurants. A slow cooker recipe guide needs a minestrone soup because is it even autumn if there isn’t any minestrone?  I’ve bookmarked this Vegetarian Minestrone Soup from Little Spice Jar.  However, again, check the Parmesan.

First it was mashed potato.  And then next I discovered that you can make lasagna in a slow cooker.  What can I say, it’s been a day of discoveries!  As such, I’ve added this Veggie Crockpot Lasagna from Pinch of Yum on to my list of things to cook in my slow cooker. I’ve never had chowder before, but I’m very into the idea of this Potato and Corn Chowder from Damn Delicious.  Sub the chicken stock for vegetable stock to make it vegetarian.

I love butter beans, so I am all over this slow cooker white bean soup.  Again, there’s Parmesan so do watch that, and swap the chicken stock for vegetarian or vegan-friendly stock. 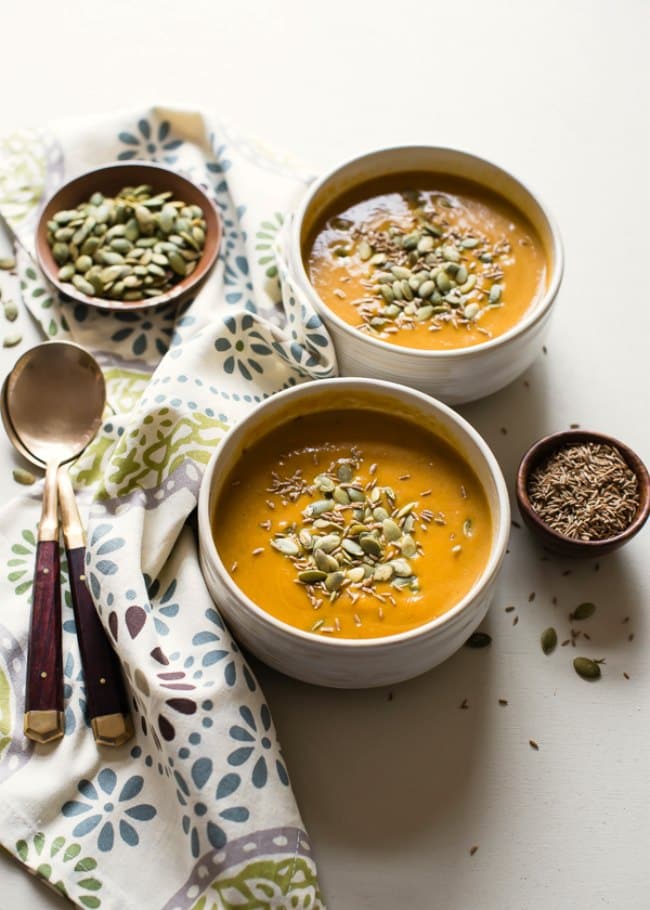 This Creamy Pumpkin Soup from Cafe Johnsonia is vegan thanks to the use of coconut milk to make it creamy.  Doesn’t it look so good? This Vegan Jambalaya from Connoisseurus Veg looks amazing, and can also be cooked on your hob.

Healthy Slow Cooking’s Butternut Squash Macaroni can be made vegan or vegetarian to suit, and is a healthier twist on the comfort food classic. 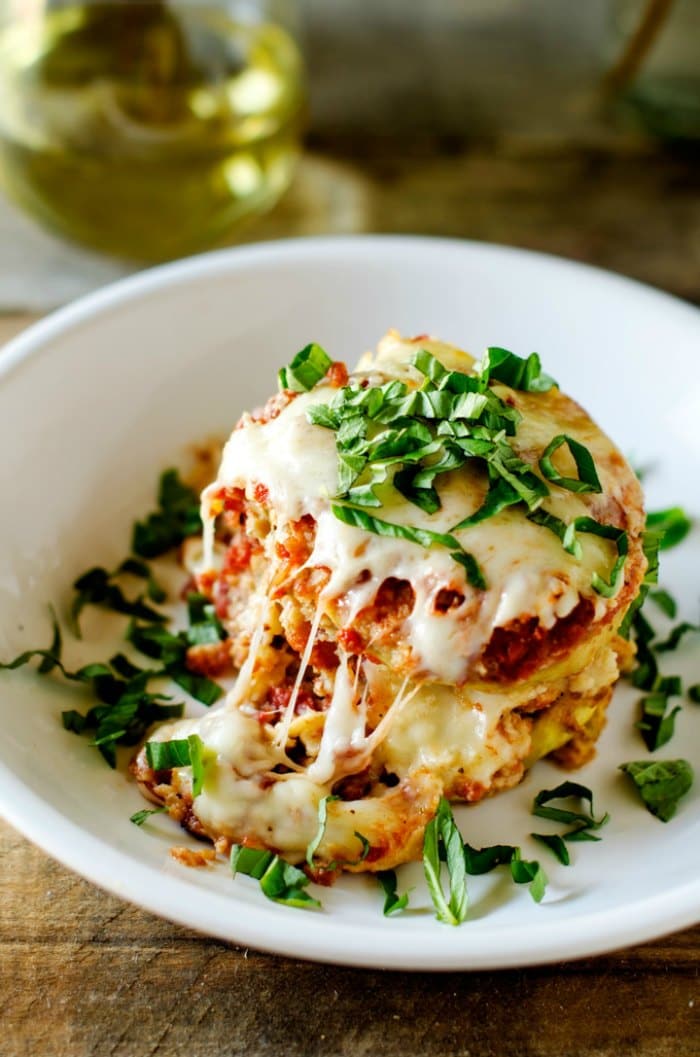 Aubergine Parmesan from Wendy Polisi because calling it Eggplant Parmesan just sounds wrong!  I always thought something like this would be tricky to make, but it actually looks pretty easy!

This Coconut Quinoa Curry from Simply Quinoa is vegan and vegetarian friendly and looks so flavourful!

This Hearty Veggie Chowder from Delish Knowledge is vegetarian and looks so straightforward to make. 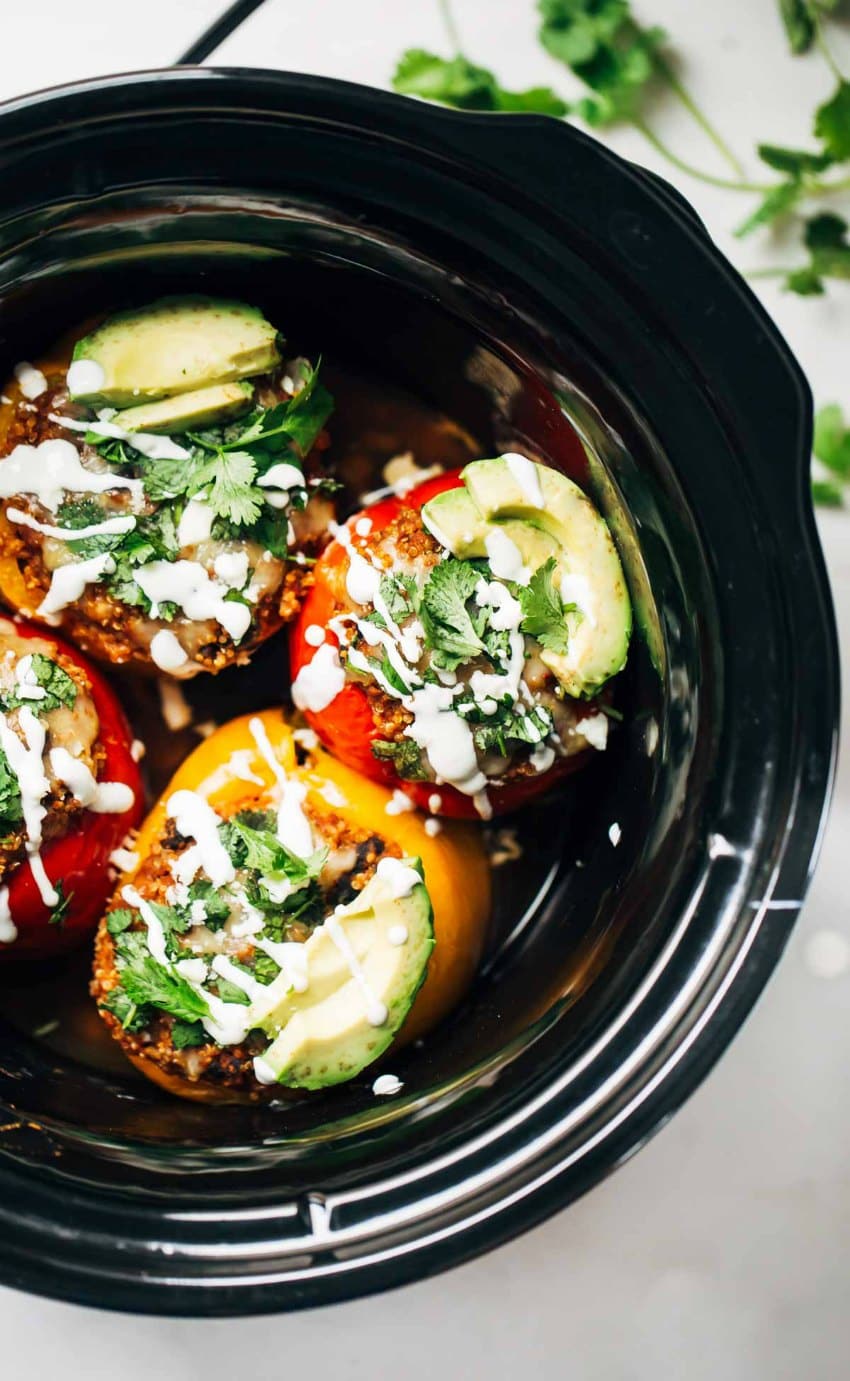 And finally, I’ll round off this list of vegan and vegetarian slow cooker recipe ideas with these vegetarian Quinoa and Black Bean Stuffed Peppers from Pinch of Yum.  Just look at them!  I would not have thought you could make something like this in a slow cooker.

And if you’re looking for more recipe inspiration, I have loads! From this vegan lime and coconut curry to some vegan dinner ideas, and even vegetarian breakfast ideas and vegan Easter lunch ideas.