AD | Growing Together in Glasgow With The Aviva Community Fund

The other week my eldest daughter and I walked through Glasgow’s West End. We reached the Botanic Gardens – normally the furthest point I would venture from Byres Road – but this time we kept walking along Queen Margaret Drive, crossing the River Kelvin. After passing an array of cosy coffee shops, within a few minutes we reached Kelbourne St, an unassuming residential city street, where a kid’s playpark sits nestled to a derelict site, offering no indication of what lay ahead.

We walked along Kelbourne St, wondering if we had come to the right place. Just as we were about to turn around we came across a fence of brightly painted characters and a sea of bunting, indicating we had indeed come to right place – North Kelvin Meadow. 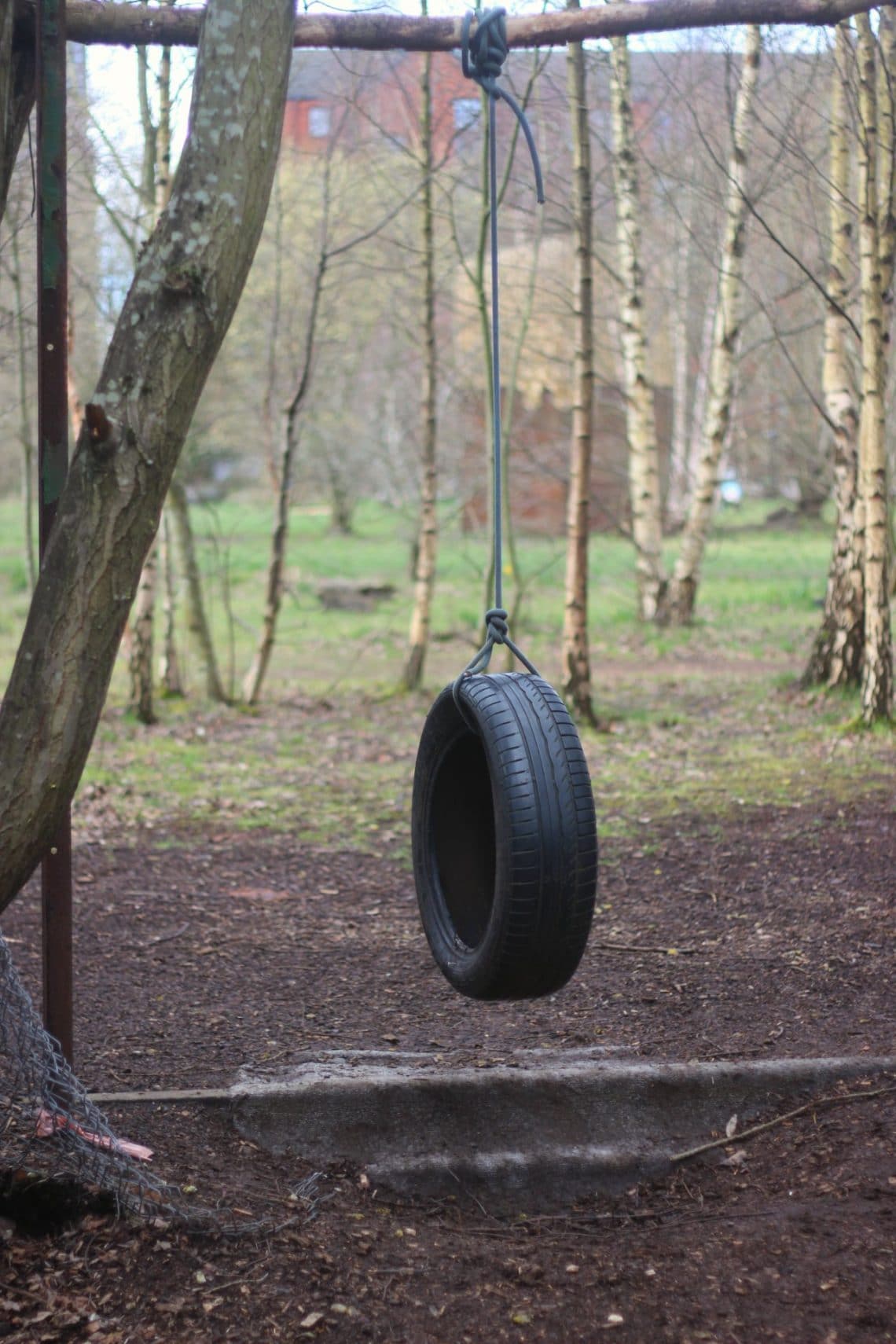 I’d come to visit North Kelvin Meadow to see firsthand how the Aviva Community Fund is helping to build stronger and more resilient communities through their funding and ‘more than money’ support for groups up and down the country.

I’m no stranger to Glasgow – I grew up on the west coast, only a train ride away, and spent most of my teenage weekends in this fair city.  This made it a real delight, some decades later, to come across a delightful corner of community greenspace in Glasgow that had hitherto gone under my radar. 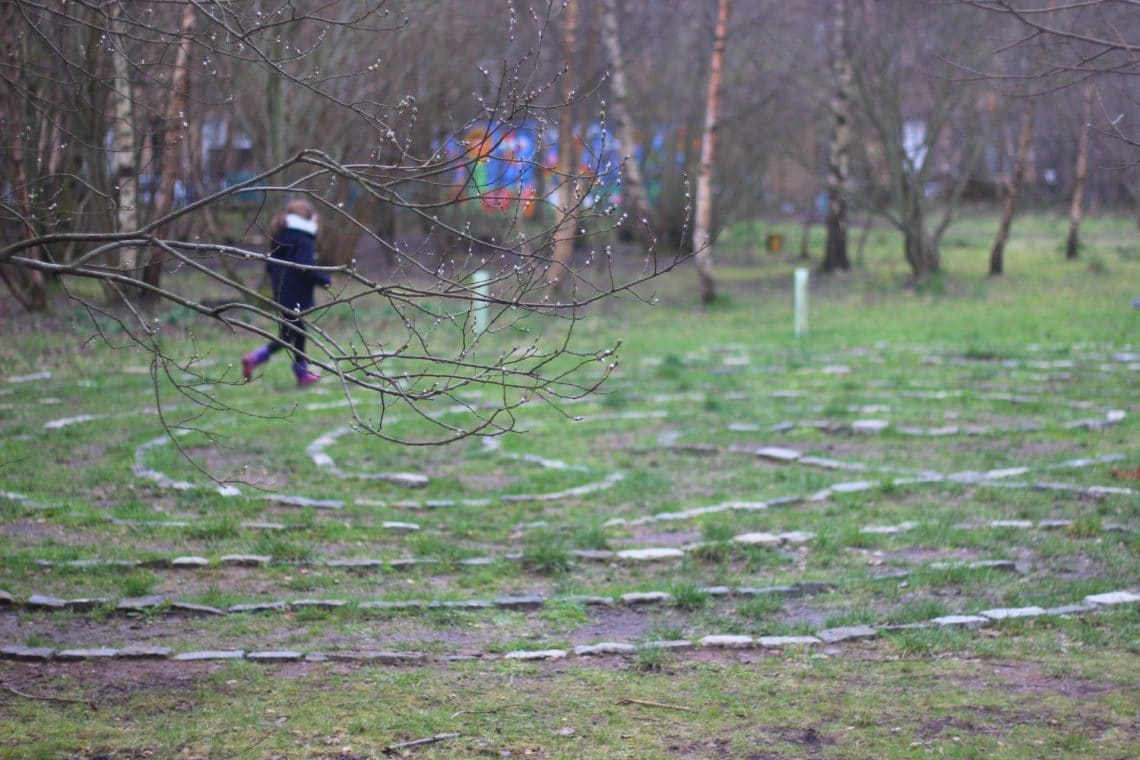 The money granted to the Meadow has allowed the band of volunteers to buy new tools, roses to create a briar to help support local wildlife, and for some new raised beds for community vegetable growing to replace the rotting ones.  The group receives no other funding and does not charge individuals or groups for use of the Meadow.  This makes the Aviva Community Fund  a real life-line for volunteer-led groups, such as North Kelvin Meadow, with the funding and further guidance making a huge difference.

The Aviva Community Fund allows community groups to enter in one of three categories (Health & Wellbeing, Environment or Skills for Life) for a chance to secure up to £1,000-£25,000 in funding. The fund also helps communities’ future proof themselves ensuring they are ready for whatever tomorrow may throw at them. Their support includes extensive toolkits, helping local groups to publicise themselves and raise awareness of the work they do. 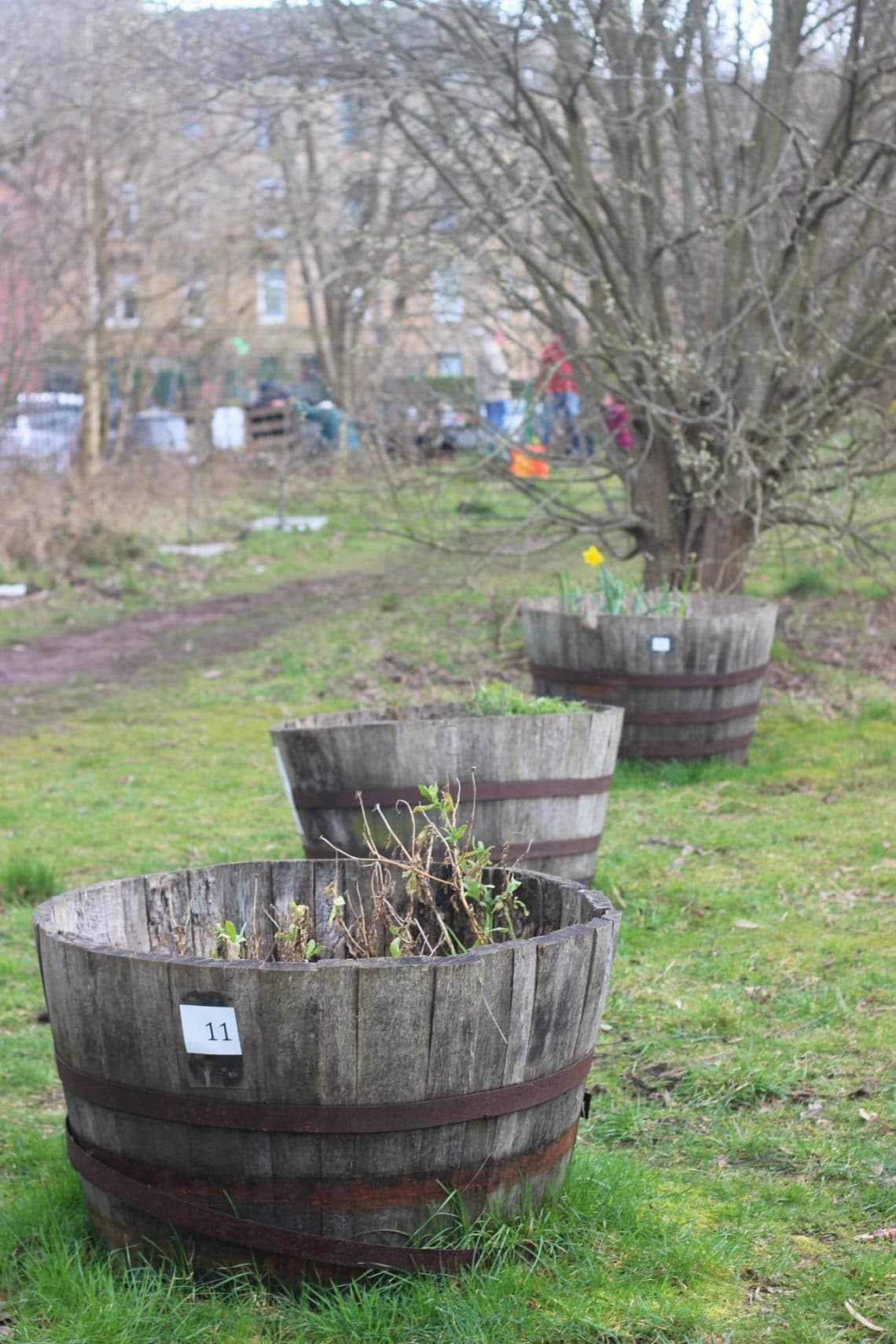 I spent some time exploring North Kelvin Meadow’s 1.4 hectare space, taking some photos and then had a lovely chat with Douglas, one of the volunteer gardeners, as well as some of the other local people who come together to use the space.

Douglas explained that the Meadow was a former playing field that had long laid abandoned and become a dumping ground for rubbish.   Some signs of its former life as a playing field are visible – with some metal rigs still in place – but apart from that, there are no other signs that this Meadow has been anything but a well-loved and used community space.  Douglas highlighted the fact that where the local community once organized litter picks to clean up the area, now there is no need for such activities as the Meadow is treated with the pride and respect it deserves.  The site is absolutely pristine – a real testament to the community pride the area instills.

Within the Meadow there is a bee-hive, community vegetable growing plots, wildlife gardens, a maze for kids, a fire pit, and more.  Whilst it was still winter when I visited (it had snowed the day before my visit), and a lot of the trees and beds were bare, we spotted squirrels scurrying up trees and a host of bees.  I’d love to make a return visit in summer to see the place in full bloom! 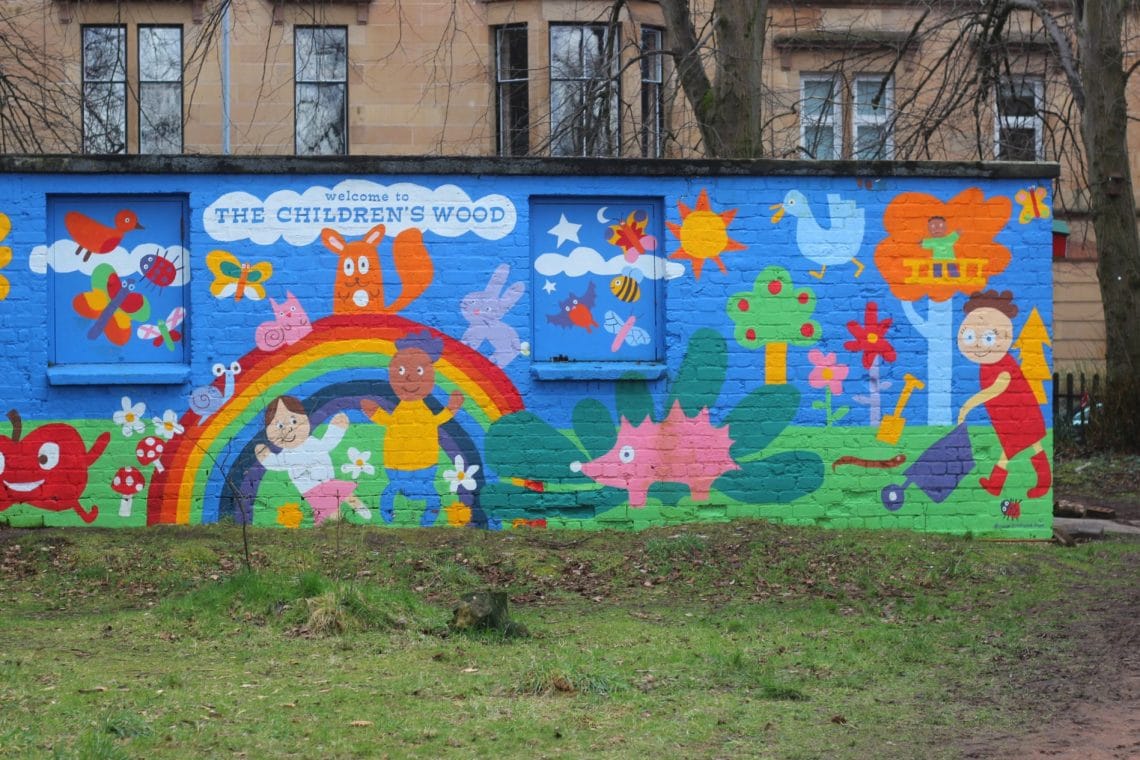 Right next to North Kelvin Meadow is the Children’s Wood – a great site run by a separate charity that really complements the Meadow.  The Wood has a range of structured and unstructured play areas for kids – including mud kitchens, a willow tent, swings, and more.  The space is popular with families, as well as local nursery and school groups who all make regular outings to play there. 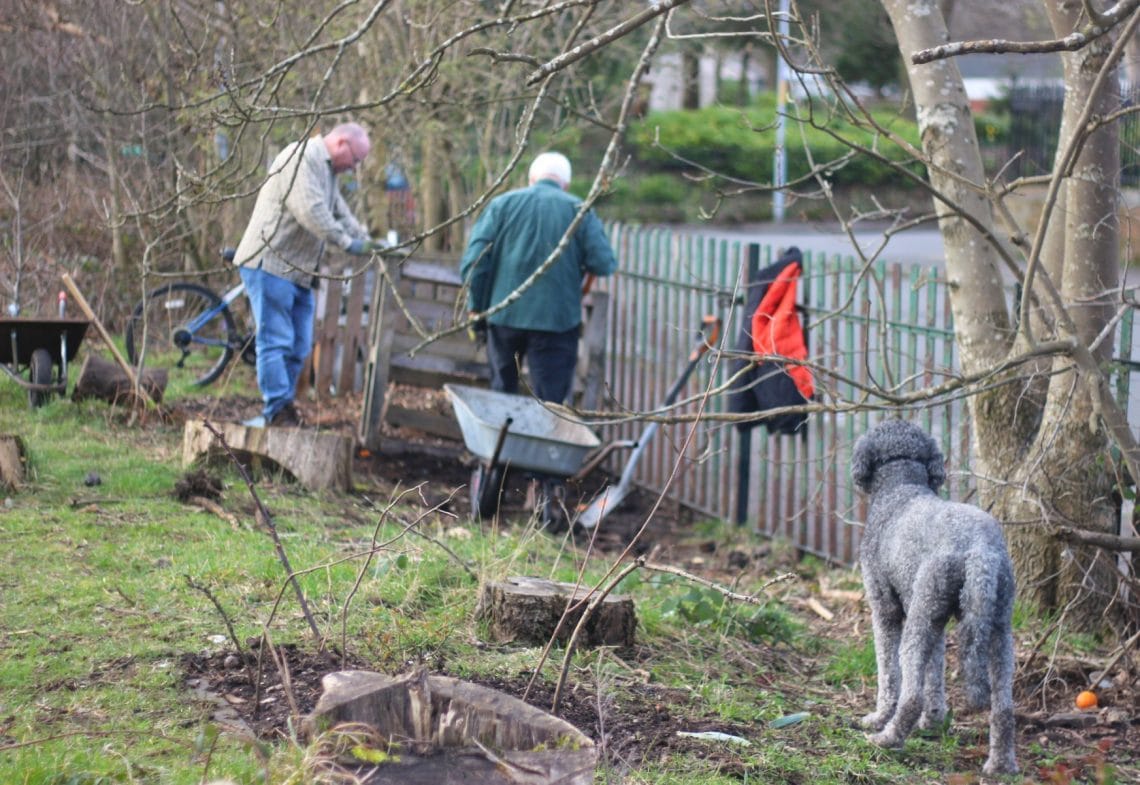 Returning to the Meadow, Douglas, and a group of volunteers – Mike, John, and Tara – were planting the roses whilst I was there – which was in fact made possible by the Aviva Community Fund.  They explained that in an area dominated by tenement flats, with no garden space, and in a city with huge allotment waiting lists, the Meadow acts as a great community spot that helps tackle social isolation.

The volunteers regularly come for some fresh air, gentle exercise and the chance to garden and grow, but by far the social aspect – the chance to meet other community members, have a chat, drink tea from flasks and share some biscuits – is the main draw. 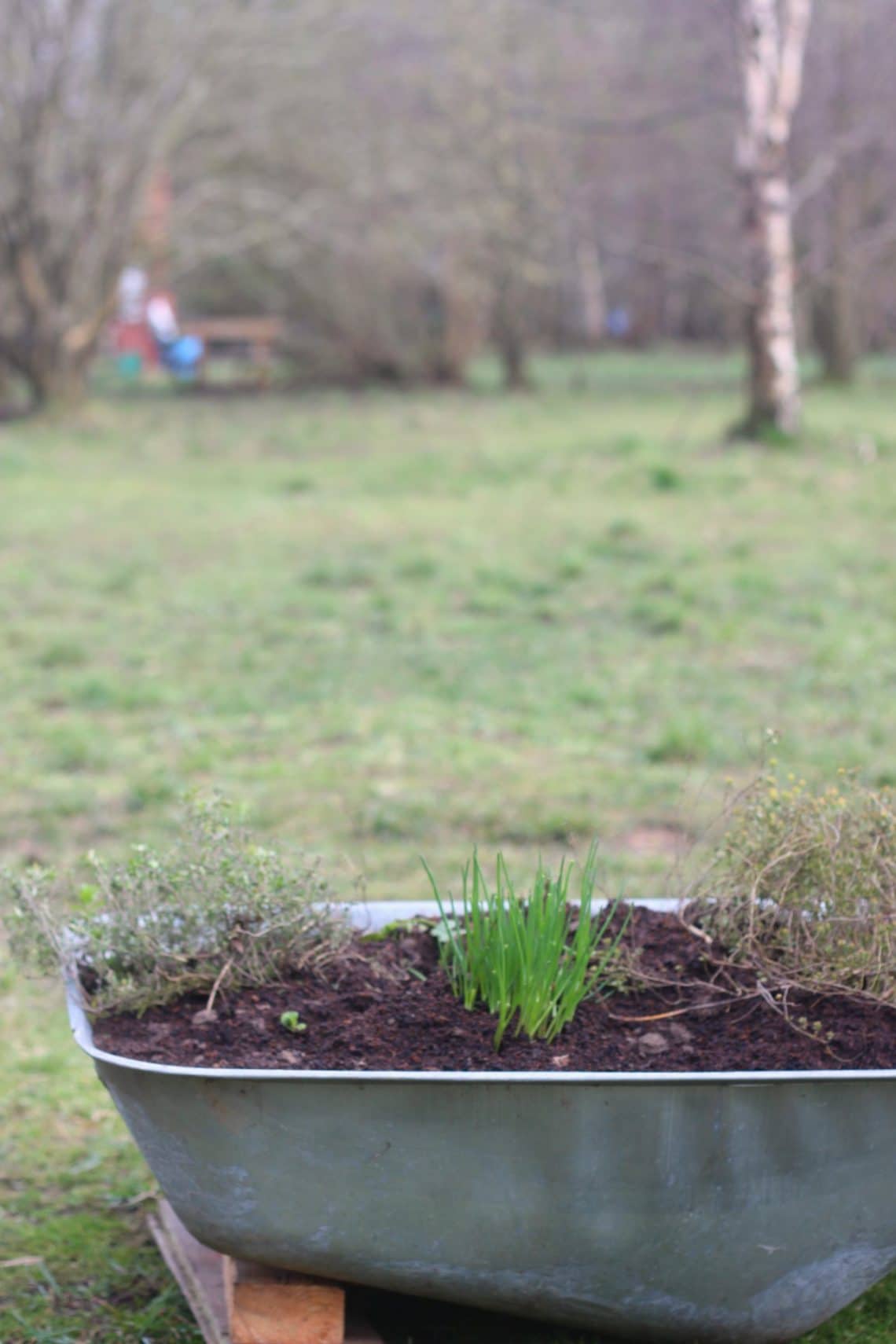 It’s clear that the Aviva Community Fund is going to make a big difference to North Kelvin Meadow.  They have been operating on a shoestring for over 10 years.  This has led them to be creative – old bathtubs and broken wheelbarrows have been used as planters – but there’s only so much that can be done on no money and I can’t wait to visit again to see how the Aviva Community Fund helps them grow.

You can also read my post on how to help your local environmental charity, to see how you can help charities like North Kelvin Meadon.

Did you know that World Water Day was on Friday? This year the theme was leaving no-one behind – addressing the reasons why billions of people across the globe still don’t have access to safe water.

Here in the UK, we are incredibly lucky to have constant access to safe, clean water 24 hours of the day, 365 days a year. However, whilst our water is clean and safe, not everyone seems to like the taste of our tap water. Each year over 3,100 million litres of bottled water are sold in the UK. A staggering amount for a country with clean and safe water literally on tap.

How do you feel about tap water? I had always been happy to drink tap water – after living most of my years in Scotland I could not for the life of me work out why anyone would drink either bottled water or filtered water. I believed that anyone that was sucked in by either option was, let’s just say, more than a little misguided.

That was until my late twenties when we moved to the south-east of England. What a shock to the system.

After a lifetime of soft water, the hard water of Hampshire felt like an assault on our taste buds. I could just about tolerate a glass of water, but when it came to tea it was a dealbreaker. Not only was the taste of tea fairly nasty, but visually it wasn’t right either. I noticed my tea always had a horrible greasy looking film on top, which is never particularly . Worst of all, sometimes big furry bits of limescale would come loose from our kettle and end up floating in mug.

After about a month I ripped up my previously held beliefs on water filters and bottled water. Not wanting to go down the bottled water route for environmental reasons, I found myself in Robert Dyas handing over money for a water filter, desperate for a decent cup of tea, but not wanting it to come at the environment’s expense.

I was so excited to get home and try it out, but that feeling lasted all of five seconds when I that the water filter I had assumed was the ecologically superior option to bottled water actually had a plastic filter cartridge that required replacing every 30 days with another plastic filter cartridge in order to keep on enjoying filtered water. Suddenly this one innocuous jug that we filled with tap water became this consumer of single-use plastic.

According to Phox – an ethical water filter company based in Glasgow, who are launching on Kickstarter today – over 100 million filter cartridges go to landfill each year. That’s a lot of plastic.

If Phox had been around in our Hampshire days. Phox, as a company, to help eradicate the single-use plastic problem associated with both bottled water and filtered water. Not only are they launching their stylish V2 water filter that is made in Scotland from recycled plastic and glass, but it’s also the first ever water filter to completely eradicate disposable plastic cartridges.

Instead, Phox’s V2 filter has a refillable cartridge, meaning you can say goodbye to single-use plastic waste. The only thing you have to replace is the filter’s inner material. The used inner materials can be disposed of with general household waste, meaning your water filter generates only a tiny amount of waste compared to your average water filter.

Different filters can be used for different purposes. The “Clean Pack” filters water to around a pH neutral level (ideal for coffee purists), and reduces heavy minerals, , and bad tastes. Meanwhile, the “Electrolyte Pack” creates alkaline water which aids hydration and sports recovery, and can be beneficial to acid reflux sufferers and those on an alkaline diet.

Phox has cleverly thought of everything – right through to the postage of the filter’s inner material. Instead of swathes of plastic wrapping, as they are only sending the bare minimum – the inner material – this is delivered in a slim box made of recycled card, that conveniently fits through your letterbox. It’s easy on the packaging, which is great for the environment, but it also means no more missed deliveries either!

The V2 water filter launches today on Kickstarter, and to celebrate its launch, Phox is doing a special early bird offer where you can get 60% off the normal RRP off the stylish V2. As well as the water jug itself, you get a 12 month supply of filters, and a water bottle for hydration on the go, all for £45 instead of the normal price of £115. This offer lasts for 48 hours only, from today, Monday 25th March until Wednesday 27th March, so do get in quick if you are considering purchasing one of their water filters.