There are a few things in life I don’t bother with.  Organic oranges are one of them.  I may be wrong, but my thinking is that the peel is probably too thick for pesticides to get through.  My one exception with oranges is when I’m cooking or baking with them and the recipe calls for the zest or peel of an orange. Then I’ll splash out on fancy organic oranges.

The other month I really fancied some marmalade and looked for some in the shops. The cheapest I could find for a jar of organic marmalade was £3, which felt a bit extravagant for me.  As we weren’t too far off of marmalade season I thought I would bide my time and make my own organic marmalade to make my money go further.

And here we are – marmalade season!  I picked up some organic oranges and managed to make 9 jars of organic marmalade for £8. That’s less than 89p a jar!  Take that fancy shop-bought marmalade!

And I thought I’d share my organic marmalade recipe with you today.  It’s loosely adapted from this BBC Good Food recipe and I’ve found this to be the easiest way of making marmalade. There is no peeling, adding things to muslin bags, or fretting with a knife whilst trying to remove pith from the peel.  It is rather time-consuming though – it did take 3 hours – but it is a great way to while away a wet Saturday in winter.  Plus you’ll have enough jars of amber goodness to keep you smiling of a morning for quite some time to come, which makes it all worthwhile. 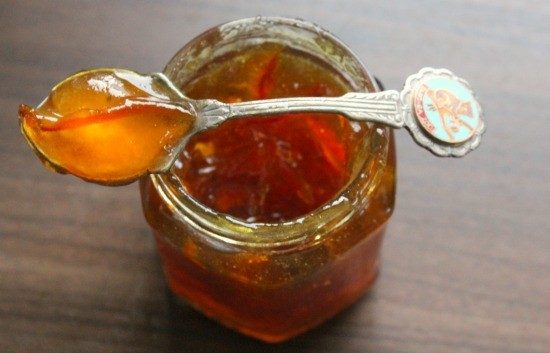 This organic marmalade recipe has a bright and zingy taste to it, that will really help wake you up in the morning!
Prep Time 20 minutes
Cook Time 2 hours 15 minutes
Total Time 3 hours
Servings 8 – 10 jars

I hope you enjoy this organic marmalade recipe!  What’s your favourite preserve?  Also, do you normally bother buying organic skinned fruit?  I would love to hear your thoughts on this!

And if you are big on oranges, then do try my cranberry and orange infused gin recipe. It’s a good one!