One of my early posts on Moral Fibres was my experience of using reusable nappies on my daughter.  At that point, we were using 100% reusables.  However, at around the 18-month-old mark, things changed. We found that, despite our best efforts with booster pads, using reusables overnight was no longer working for us.

Waking up in the night to change nappies was not an option.  And we couldn’t find any other real solutions.  Instead, we switched to using a disposable nappy at night time. Whilst we continued with reusable nappies in the day,  we did also use disposable nappies during bouts of bad nappy rash.  This seemed to be triggered by teething.  Switching nappies for a short while, and using this nappy rash cream recipe both really helped.

I switched to the more eco-friendly disposable nappies on the market.  I found they were a little more expensive than other nappies.  However, as we were only using one pack of nappies a month, I felt I could accommodate the extra spend.

I really love washable nappies, and would always recommend them over disposables.  However, perhaps reusables don’t work for you. Or perhaps you’re not into the idea of reusable nappies.  I understand they are not for everyone.  As such, I thought I’d do a round-up of the eco-friendly disposable nappies available in the UK. Can disposable nappies be eco-friendly?

Before I start, I do have some things to point out about eco-friendly disposable nappies.  My main gripe is that they all say they are biodegradable.  However, due to the way landfill works, nothing truly biodegrades in landfill.

Oxygen is required for biodegradable matter to break down.  However, most landfill sites are so tightly packed that they do not let much or any air in.  Therefore, any biodegradation that does take place does so very slowly, or it is mummified.

Biodegradable items in landfills also release a considerable amount of the greenhouse gas methane.  All I will say is be skeptical of green claims of biodegradability.

Can you compost biodegradable nappies?

Even if you were tempted to try out composting, I wouldn’t.  According to RecycleNow you cannot compost biodegradable nappies in a compost bin as it poses a health risk.

Some nappy manufacturers say you can compost a biodegradable nappy at home.  This is as long as you don’t compost soiled nappies.  As someone who composts, this sounds like total madness.

If you are using disposables full-time, or even using them part-time, then you’d need a pretty massive composter.  This would be purely to hold that many nappies over a sustained period, as well as the mixed waste that composters require.  Nappies would take a long time to decompose in a standard composter, so you might end up with an overflowing before long.  In short, I wouldn’t.

So what’s the point of paying more for eco-friendly nappies?

I’m not completely down on disposable nappies.

There are many plus points associated with eco-friendly disposable nappies.  The first is that they are typically made with far fewer harsh chemicals compared to other nappies.  The absorbent core of disposable nappies is typically filled with harsh chemicals.  However, the eco-friendlier brands have found less chemical-intensive ways to create absorbency without leaks.  This is good for the environment and for your baby’s skin.

The eco-friendlier brands also tend to made from more renewable resources.   As standard nappies are mostly made of virgin plastic, this reduction in the use of fossil fuels is great for the planet.

You can avoid supporting these practices by switching to eco-friendly brands, where possible.  This brings me on to my guide to nappies: 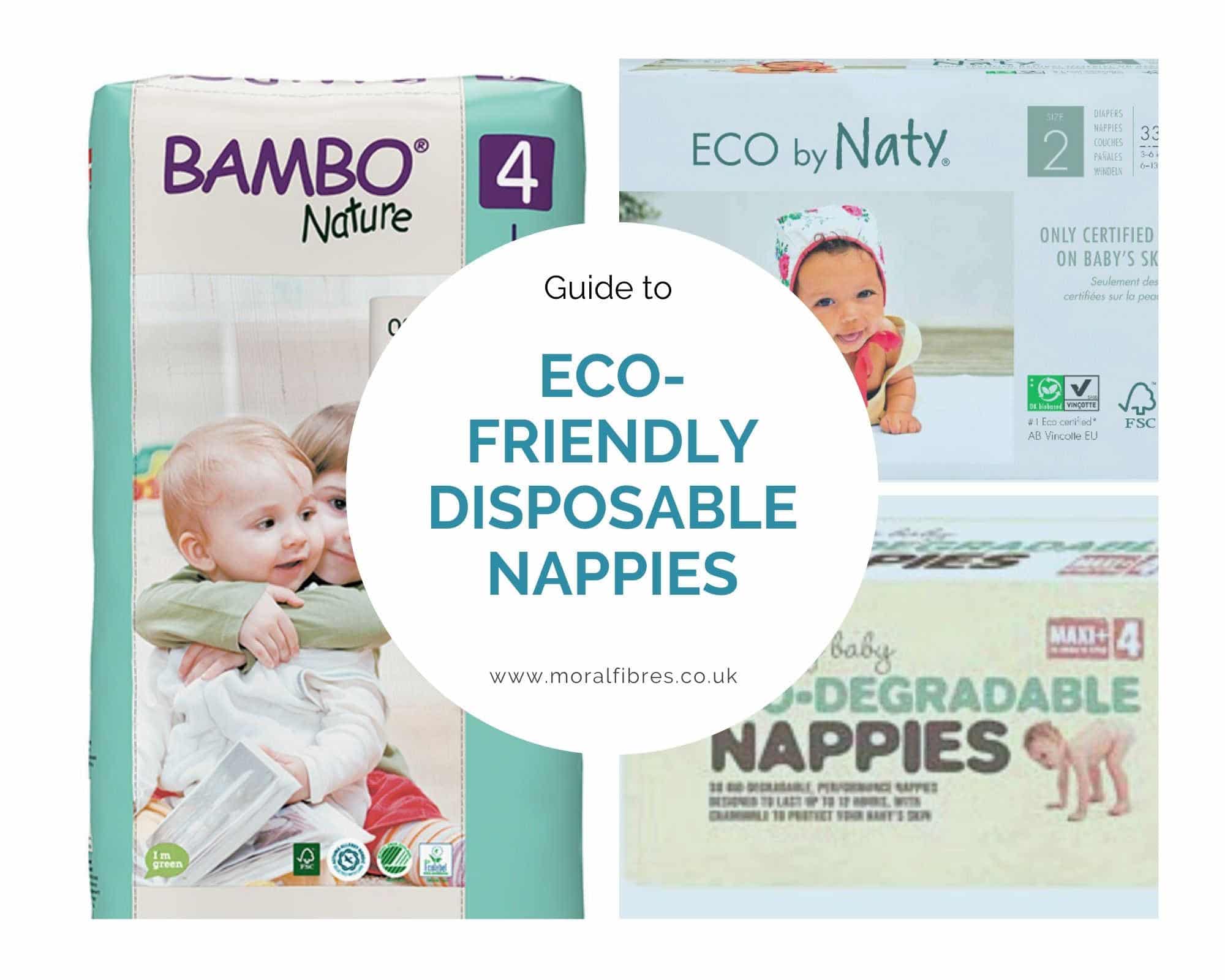 Contains affiliate links, denoted by a *

Danish made Bambo Nature* nappies top the Ethical Consumer’s league table of disposable nappies.  It’s also the only nappy to be independently accredited by the Nordic Swan eco-label.  Bambo Nature has an absorbent starch core, rather than a chemical-based core.  The brand also avoids perfumes and other harsh chemicals, including chlorine.

Beaming Baby* claims their chlorine-free nappies contain 30% fewer chemicals than standard disposable nappies.  The absorbent layer inside the nappy does contain gel.  However, this is primarily made from very finely shredded paper.

Moltex Oko* say their nappies are made with more than 50% renewable resources.  They’re chlorine-free.  What’s more, they contain no perfumes, as well as minimal amounts of absorbent gels.

Naty by Nature Nappies* are made in Sweden from 70% natural materials.  These include a combination of natural tree pulp and maize derivatives.  As such, they are 100% chlorine, latex, and plastic-free.

We personally used Naty nappies for both of our kids.  I can personally verify that we didn’t get any leaks overnight.

gNappies* are a reusable/disposable hybrid.  This means they feature washable covers with disposable inserts.  As such, they could be an alternative if you didn’t want to go down the all washable or all disposable route.

gNappies say that non-soiled inserts can be placed in a home composter.  Here they say the insert can break down in around 50 to 150 days.  However, it may not be the green solution it seems.

Granted, the inserts are much smaller than conventional nappies.  However, if you’re getting through around 5-7 inserts a day (around 40 a week), then you’re going to run into a problem.  Unless you have a massive compost bin, then your composter may fill fast.  I would say it will fill quickly with nappies than you can make compost.  150 days is a long time when you’re filling the composter every day with more nappies.

What is the best option?

My opinion?  I know washable nappies aren’t for everyone.   If you don’t use washable nappies and can’t afford the extra spend of buying eco-friendly disposable nappies then I wouldn’t worry about using standard nappies.  Budgets don’t often stretch to more expensive nappies.

As parents, there are a million other things to feel guilty about, without worrying about which nappies you use.   There are plenty of other more beneficial and low-cost ways to help the environment.

I would say that if you use washable nappies and are just looking for a nappy just for night-time use then I would try one of the brands listed here.  The same goes if you can afford to use eco nappies full time.

I originally wrote this post back in 2013.  I’ve updated it for 2021.  However, my kids have grown and the nappy days are behind us.  Therefore I need your help! If there is a brand you love that isn’t listed here do let me know. I want to keep the post updated so that it can remain a useful resource for parents.

ps: I have a handy guide to ethical kid’s clothes right this way.  I also have loads of ethical baby and child tips which I’ve added over the years.  From eco-friendly potty training tips to my eco-friendly baby essentials.  Do check them out!