Here’s an easy pickled cucumber recipe, for when cucumbers are at their very best.

We’ve got an overabundance of flowering fennel right now. It takes over quite a large corner of our garden. However, rather than dig up the bulbs to eat, the flowering fennel is something we want to keep. The bees and wasps absolutely love it.  As well as helping wildlife, attracting wasps to our garden helps keep our caterpillar population at a minimum – companion planting for the win!

I like to use fennel fronds in cucumber salad. Served with feta cheese, they are delicious. However, I’ve never done anything with fennel flowers.

One note before you get started. I made one large jar and five small jars of cucumber pickle, so make sure you’ve got enough jars to hand for your pickled cucumber!  You also want to ensure your lids are vinegar proof – meaning there isn’t any metal that can touch the vinegar.  If you don’t use vinegar-proof lids, the vinegar can react with the metal lid, giving the pickled cucumber a metallic taste.

If you’re using old jars that you’re recycling, then look for lids with a plastic lining in them.  The good thing is if you’re using jars that previously contained any kind of pickle, chutney, mayonnaise, or tomato sauce then the lids are sure to be vinegar proof.  The only lids I’ve seen which aren’t vinegar proof tend to be lids from honey jars.  Kilner clip jars are also good for pickle making. 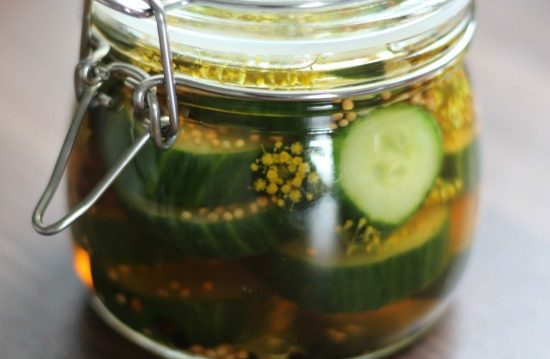 This delicious and easy pickled cucumber recipe with fennel is so easy to prepare and perfect for adding a touch of summer flavour to any meal.
Prep Time 15 minutes
Cook Time 10 minutes
Total Time 2 hours 10 minutes
Servings 6 jars

I hope you enjoy this easy pickled cucumber recipe!  It’s definitely a firm favourite in our house!